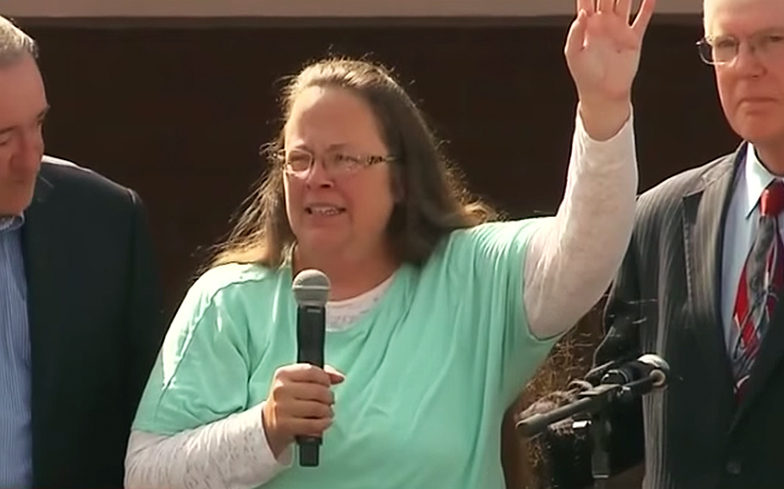 Kim Davis just won’t move on from her vicious battle against marriage equality.

The Kentucky county clerk, who notoriously chose to go to jail over issuing marriage licenses to happy same-sex couples, is releasing a book about her encounters with “fist-pounding homosexual men” among other things.

Under God’s Authority: The Kim Davis Story was co-authored with John Aman and Mat Staver, two members of the anti-LGBTQ organisation Liberty Counsel which represented her for free during her court battles.

“Kim chronicles her dramatic encounters with furious, fist-pounding, homosexual men and the hate mail that flooded her office,” reads a blurb of the book on the Liberty Counsel website.

“Discover what God did when one woman refused to compromise her faith and what He will do when you are called to do the same.”

The book, which costs $25 and can only be ordered online, promises to deliver the “inside story” as Davis talks extensively about her “courageous stand for marriage” and the six days she spent in jail.

Proceeds from the book will go towards the Liberty Counsel, a spokesperson said.

Following the United States Supreme Court’s decision to legalise same-sex marriage in 2015, Davis – who has been divorced three times – claimed that she couldn’t issue licenses to same-sex couples as it was against her religious beliefs.

As she seeks re-election as county clerk for Rowan County, Kentucky, Davis is facing challenges by four Democratic nominees including David Ermold, one of the men she denied a same-sex marriage license to in 2015.