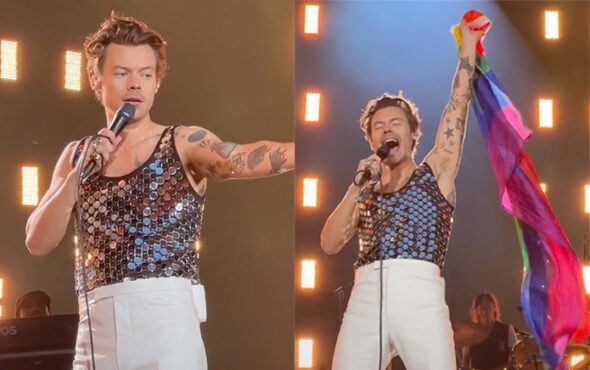 Harry Styles helped a fan come out as gay during a show at Wembley Stadium on 19 June after spotting their sign in the audience.

Mattia, a fan from Italy, held up a piece of cardboard that said: “From Ono to Wembley: Help me come out.”

The singer-songwriter was happy to help and proceeded to hold the sign up to the audience.

“Thank you, okay,” Styles then said, speaking directly to Mattia. “So you would like the people of Wembley to bring you out?”

After handing the sign back, the As It Was hitmaker picked up a Pride flag and continued: “Make some noise for Mattia everyone! When this flag goes above my head, you are officially out, okay? I think that’s how it works.

“When this sign goes over the head, you’re officially gay, my boy!”

The former One Direction star then teased the audience by pretending to almost raise the flag, before finally doing it and declaring Mattia a “free man” in the process.

Styles took a second to take in the cheers from the audience, tilting his head back and closing his eyes as he held up the flag.

This is not the first time the star has helped a fan come out during one of his gigs.

During one of his Love On Tour shows in Milwaukee on 3 November, Styles helped a young girl tell her mother that she’s gay.

When the From the Dining Table hitmaker saw it, he instantly ran towards her and held the microphone towards her so she could make the announcement.

The young girl proceeded to tell the former One Direction star that she was fearful due to there being “a lot of people” around.

Styles responded by asking if she wanted him to tell her mother for her, which the young girl agreed to.

He then ran across the stage singing, before declaring: “Lisa, she’s gay!”

The camera on the big screen in the Fiserv Forum arena instantly panned to the girl’s mother, who was overwhelmed as the crowd cheered in support.