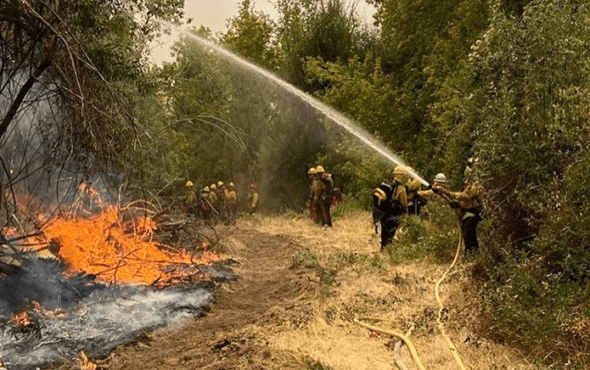 A gender reveal celebration has been blamed as the cause of a wildfire outbreak in Southern California.

Officials have stated a “smoke-generating pyrotechnic device” is likely to have been the trigger to one of the few wildfires that have erupted across California.

California is currently experiencing a record breaking heat wave which has intensified one the state’s worst wildfire seasons. Over 500 personnel, 60 engines and four helicopters have been assigned to the breakout, according to the California Fire department page.

The El Dorado Fire is still ongoing with only 7% of it contained. After more than 7,000 acres have been scorched, it is possible the couple responsible for the fire could suffer fines.

Bennett Milloy, a spokesperson for California’s Department of Forestry and Fire Protection, told the Daily Mail that the couple in question could be liable to pay for the destruction caused by the fire, which is expected to cost millions.

Alongside footing the bill, it is possible the couple could face criminal charges depending on the level of damage caused to local property and the surrounding environment.

“Those responsible for starting fires due to negligence or illegal activity can be held financially and criminally responsible,” the department said on Twitter.