Florida man allegedly attacked “out of nowhere” for being gay 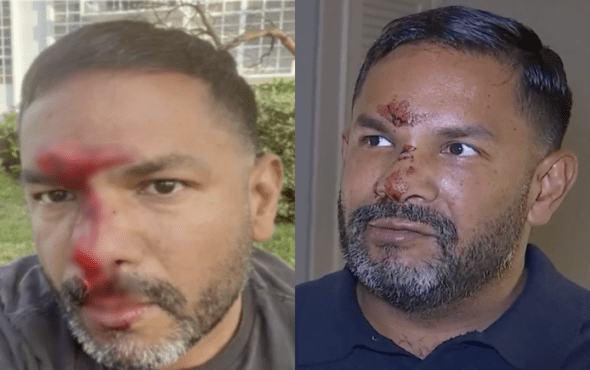 A South Florida man says he was physically assaulted outside his home because of his sexuality.

On Easter Sunday (17 April), James Garcia was approached by Maurice Charles outside of his complex in Fort Lauderdale.

Charles, 36, struck Garcia in the early morning leaving him with bleeding injuries and the fear of being targeted again.

“I have a total of 10 stitches,” Garcia, who identifies as gay, told NBC Miami. “When I close my eyes, I can see this person’s face, hear his voice.”

“I heard from the distance, from the ocean, someone screaming by himself, male,” Garcia said.

“I turned around and before I could react, this person walked up to me and asked me, ‘Are you gay?’ and then punched me.”

The perpetrator, Charles, was previously convicted of aggravated battery with a deadly weapon in 2017 and served a four-year prison sentence.

Following the attack, Garcia received medical attention for 10 stitches on his forehead, nose and lip. He also suffered from fractured cartilage on both sides of his nose.

Charles reportedly asked Garcia if he was gay before assaulting him. “He asked the question,” he told the news outlet. “That was pretty obvious that he was targetting someone in the LGBT community.”

Fort Lauderdale Police have arrested Charles on the charge of aggravated battery in connection with the attack. A judge set the 36-year-old’s bond at $15,000.

“It’s important that we create a message around urgency to our elected officials, that crimes like this should not be ignored, that they should be tagged as what they really are: hate crimes,” Garcia told NBC Miami.

Despite his personal certainty that he was attacked due to his sexuality, Garcia is unsure that the incident will be treated as a hate crime: “I am concerned that it’s not going to be ranked as a hate crime and it should,’ he told News 7.

LGBTQ+ hate crimes targeting sexual minorities are on the rise. In 2021, The Human Rights Campaign recorded the deadliest year on record for trans and gender-nonconforming people, with 57 fatalities tracked.

Similarly, LGBTQ+ people are facing the greatest number of hostile anti-LGBTQ+ laws on record. As of this month, Republicans have proposed 325 anti-LGBTQ+ bills, according to Prism Reports.