Emma Corrin says it was “scary” coming out and changing pronouns 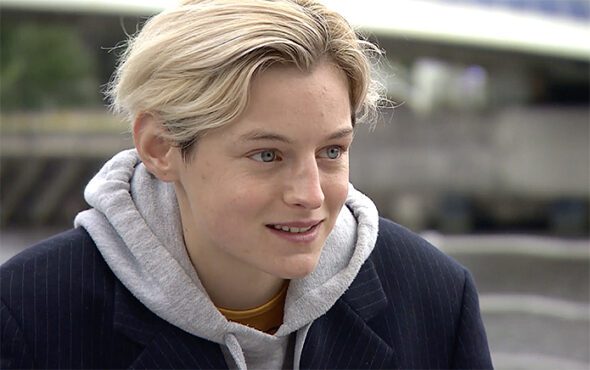 The Crown star Emma Corrin has opened up about coming out and opting to use “she/they” pronouns.

In an interview with Victoria Grimes on ITV News, the 25-year-old actor addressed her experience in coming out as “queer” for the first time.

Corrin, who rose to fame in the hit Netflix show The Crown, candidly spoke about their journey with gender and sexuality.

“I think visibility is key with these things. My journey has been a long one and has still got a long way to go,” the actor told Grimes, alongside actor Nabhaan Rizwa.

Corrin talked about labelling herself for the first time and looking to find an identity that best suits her experience.

“I think we are so used to defining ourselves. That’s the way society works within these binaries and it’s taken me a long time to realise that I exist somewhere in between and I’m still not sure where that is yet,” Corrin said.

The actor added: “I know the people on social media and around the world who have been talking about it have helped me on my journey.

“When I started posting about it it felt very scary and revealing and I wasn’t sure if it was the right thing to do but the feeling I’ve got from other people in the queer community has been wonderful.

“I just walked through from where we’re staying along canal street and it’s just an amazing feeling of solidarity, it’s a beautiful feeling to be among that sort of thing.”

The star, best known for her award-winning performance as Princess Diana on Netflix’s period drama The Crown, updated her pronouns on Instagram to read “she/they” in July.

They also shared a stunning new photoshoot by artist David-Simon Dayan, in which they can be seen in a binder, a garment often worn by trans and non-binary people to compress their breasts and alleviate chest dysphoria, as well as improve their mental health.

In Corrin’s caption, they wrote: “Some time before I bought my first binder, messing around with @sirdavidsimon, we used boxing wrap, thanks for capturing this with me, very intimate, very new, very cool. It’s all a journey right. Lots of twists and turns and change and that’s ok! Embrace it.”

She ended her post with a shout-out to gc2b, a trans-owned company which describes itself as “the very first gender-affirming apparel company that is trans-owned and operated”. For more information on gc2b, check out their website here.

Corrin initially came out as queer in April of this year. In the caption for her POP Magazine photoshoot, she described herself as “your fave queer bride”.