Antarctica will hold its first ever Pride event this year 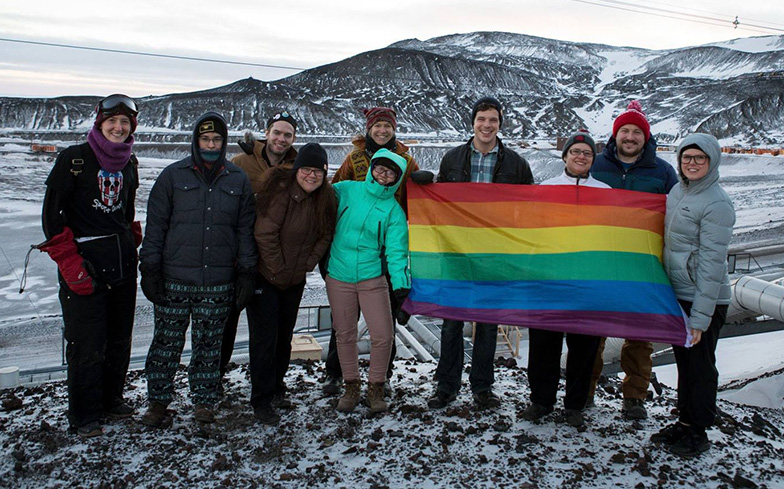 Antarctica is about to have its first ever Pride event.

A group of 10 LGBTQ people based at the McMurdo Station, a United States research centre on the south tip of Ross Island, have taken a photograph with the rainbow flag to celebrate LGBTQ Pride where it has never been celebrated before.

While they’ll celebrate properly in June for Pride Month, the group decided to take the photo back in April, as by the time June comes around the sun will leave the sky and the South Pole will enter into four months of darkness.

“Why not take this photo and let people see that there’s queer representation, even at the end of the earth,” said Evan Townsend, a steward doing work in and around the galley, during an interview with NewNowNext.

Evan came up with the idea for the photo, which was originally intended to be taken at the South Pole as it had never been done before. However, he was medically disqualified from taking the trip, and so decided to take the photo at the McMurdo Station instead.

During the summer months, around 900 people work at the station, but there are currently only 133 people stationed at McMurdo for the winter. Despite this, there’s still a small community of LGBTQ people – and they even find time to watch RuPaul’s Drag Race.

“I found a group pretty immediately,” explained Evan. “We had a few LGBTQ social events that people showed up to, and also, because it’s such a small community, it’s easy to find out who is and who isn’t in the LGBTQ community.”

Shawn Waldron, another worker stationed at McMurdo, had similar concerns: “My biggest fear before I left was, I’m going to be the only gay person, there’s going to be no one else here. I was wrong.”

Evan, who grew up in a small town in Missouri where no one ever left, says the photo has a special meaning for him – he wants LGBTQ kids around the world to know that they can achieve whatever they put their mind to.

“There was nobody I could look to and say, ‘Oh, that’s what I can do’, because even for me, the idea of travelling alone was such a distant concept,” he said.

“Just having an example of somebody who travels and can have those adventures would’ve been a great thing for me as a kid.

“But even more so being able to see that there are queer people out there who are proud of their queerness and that in no way inhibits them from living these adventures.”

Back in 2016, non-profit organisation Planting Peace travelled to Antarctica with a rainbow flag in a symbolic attempt to announce full human rights for LGBTQ people living in, or visiting, the continent.