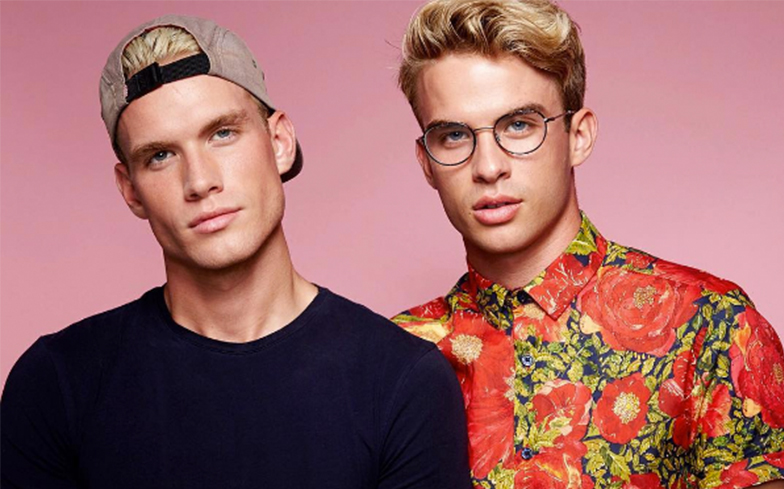 More than three years ago now, Aaron and Austin Rhodes made the brave decision to come out to their father on YouTube.

The emotional video has been watched more than 26 million times, giving solace and inspiration to a generation of LGBTQ youth who may still be grappling with their own coming out experience.

The importance of visible role models – whether it’s popstars or politicians, actors or YouTube Creators – cannot be understated.

If LGBTQ youth have access to these people and conversations, they can deal with their own inner turmoil more easily, be assured that they are not alone, and understand that there is absolutely nothing wrong with them. It’s not always that simple, but it certainly helps.

As we are in the throes of Pride season, Gay Times caught up with The Rhodes Brothers to talk about their own coming out journey, why they felt it was important to become visible role models, and how they deal with cases of self-loathing and toxic masculinity.

When did you both realise you were gay?
We always knew really, but we finally accepted it as we were going into middle school around 11 or 12.

How did you come out to each other?
We had lunch one day when we were about 17 and I (Aaron) finally cracked and told Austin about my secret boyfriend. I was young and falling for someone and just needed to get it out. About 10 minutes later Austin said “well… I’m just like you.” and our relationship with each other grew exponentially after that.

What were your main fears for coming out?
That our family wouldn’t be supportive. We’re so close to them and for that relationship to be tainted would make us so sad.

Why do you think gay men in general are more apprehensive about coming out to their father over their mother?
Masculinity and gender norms that we’re taught growing up (which is something we don’t feel is right) definitely play a big role in that apprehension. Our hope is that experiences like ours will help men out their realize that in many cases their fathers will be just as supportive and caring. You just have to be open to having the conversation.

What made you want to share the moment you came out to your dad on YouTube for the world to see?
We’ve come so far as a community, but we really wanted to show people that still in todays world it can be very hard for some people to have that conversation. Also, to show others in our position that their emotions are valid and normal.

What was the reaction from viewers like?
Incredible. The amount of love and support we’ve felt since that day has been something we never could have imagined.

How do you deal with negative comments on YouTube?
We remember the ten supportive/loving comments we scrolled past before that one and choose to not to let it affect us.

How do we educate and re-educate people about toxic masculinity, and the negative impact it can have on LGBTQ youth?
Visibility, visibility, visibility. Show and be proud of all people. We hope to continue to be a public image of a different shade of masculinity, and be the public figures we wanted and needed growing up. We need to continue to produce media and content showcasing true, positive stories of diversity.

Did you ever have a moment of self-loathing before you came out? And if so, how did you deal with those emotions?
Yes, there were of course times we’d get hard on ourselves. In those moments we’d really just lean into things that made us happy. For Aaron it was running – he loved training year around, so during those tough years he’d just put a lot of his focus in that. For myself (Austin) I’d really just rely on my friends to make me smile. Even though they didn’t know I was down it would always bring me up a bit just being around them.

How did your lives change after coming out?
Personally, the freedom to just be ourselves was what changed the most. It’s the best feeling in the world to know that people love you for you. Not someone you’re trying to be. Career wise, it’s given us an incredible platform to continue being visible and create content that is truly representative of us. We wake up feeling so grateful to get to do what we do every day.

Moving forward, how do you want to continue using your YouTube channel to inspire the next generation of LGBTQ people?
By just being open and honest with our audience. Talk about the things that may make us uncomfortable, create things that are authentic to us and most importantly just continue being ourselves. We’re so excited to grow and evolve with the people that support us.