From dancer to designer: Derek Purcell on how he’s bringing queer shine to this year’s Pride in London 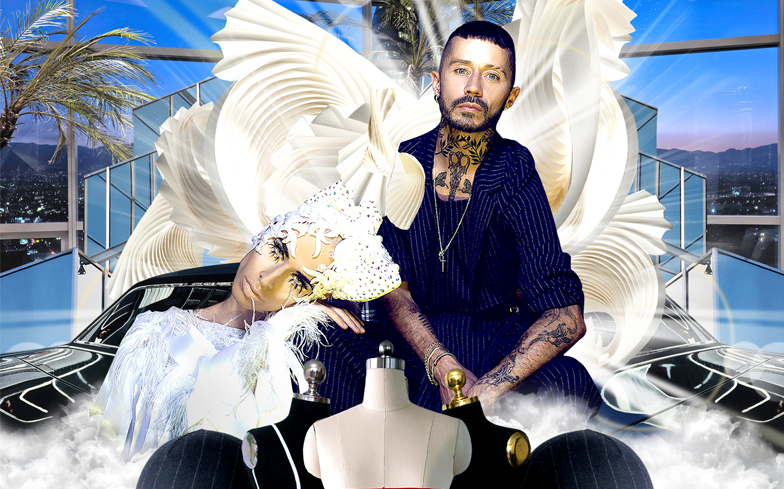 Dancer turned evening-wear designer turned costume creator extraordinaire, Derek Purcell has worked with some of the biggest names in the industry, crafting pieces that have established him as one of the most creative and elaborate costume designers worldwide.

From redirection from Rihanna, to creating Beyoncé’s jaw-droppingly sexy gold catsuit (you know the one!), shooting with Kate Moss and redefining the Spice Girl’s most iconic 90s looks for their Spice World tour this year, Derek’s ability to bring out and elevate an individual’s personality through fashion is astounding.

Now, the BANG LONDON founder has taken his creative flair and applied it to a collaboration with W London in celebration this year’s Pride in London.

We spoke to the designer about how he’s bringing queer shine to Pride and where it all began for him.

Derek, can you tell us a little about life growing up in Limerick and your early dance career?
Growing up in Limerick was interesting, to say the least. I am the youngest of seven so it was always a struggle to be taken seriously. Being a child of the 80s, a time when there was so much controversy around being gay, as a child I always felt this deep routed guilt about who I was and found it very hard to accept myself.

That all changed when I was able to express myself through dance from the age of 13. Dancing allowed me to be someone else at a time when I wanted to be anyone but me. I had so much inner-frustration that this form of self-expression was a massive release for me.

Did you always know that elaborate costume production was ultimately what you wanted to pursue?
Honestly, no. I started out in evening-wear and always hoped to have a career in fashion. It wasn’t until I had an interview with Rihanna for her show, Styled to Rock, and she said to me that, while I was really talented I didn’t seem to know where my strength really lied – it was at that point I started to question, was I a fashion designer? Or was I a costume designer? This very question was a huge turning point for me and from that moment I decided to embrace my flare for theatrics and go fully into costume design. Do you remember the first costume you ever produced?
OMG, YES! It was a Dalmatian faux fur two-piece that I made for my niece Stacey, who was also a competitive dancer. I made this with my mum at home in the kitchen with an old sewing machine we had lying around. A moment very special to me as the first time I ever sat at a machine was with my mum who, ironically, has no clue about sewing.

Each one of your costumes is so distinct, do you use your platform to help individuals express their identity?
BANG LONDON as a whole is built around self-expression. Inclusivity and diversity are at the forefront of the design process. Creating costumes is how I express myself and I encourage all my clients to do the same. My main focus as a designer is how I make people feel in my costumes and how I can help elevate their identity. As I always say, a costume is not a costume unless you put it on and it takes you somewhere else. The people who wear my costumes play just as big a part as I do. It’s all about them and what they wish to express.

Whose identity was hardest to realise and why?
There’s not really a person in particular. A lot of my clients are international, so I very rarely get to meet the artist I’m working with. The hard part is providing a service that’s so personal for people I’ve never met. I spend days going through their Instagram accounts looking at their daily lives to try and gauge who they are and what they like. I build a brief based around that rather than who they are on stage.

Is there a costume that you’re particularly proud of?
Very early in my career, I was given the opportunity to work with Beyoncé for her On The Run Tour. We designed the (iconic) crystal catsuit that she wore performing Drunk in Love with Jay Z. I had only just started BANG LONDON so it was such a proud moment for me.

Taking the Beyoncé out of the equation, can you tell us about some of your career highlights?
For me, one of the biggest highlights was working with Kate Moss on a six-page exclusive for Beauty Paper magazine, styled by the amazing James Brown. When James asked me to do the shoot, I was speechless. I could not believe my first ever publication was going to be with Kate Moss, an amazing woman who was a dream to work with. Now, back to the icons. What was it like when you were asked to produce seven costumes for the Spice Girls’ long-awaited tour?
When the email came through for the Spice Girls I could have died. I actually screamed SPICE UP YOUR FUCKING LIFE! Working on the Spice World tour was life-changing and is the job I am most proud of to date. Once I acknowledged the importance of this project, I knew I would need a strong team and that’s exactly what I got. The support and dedication from my team is what made it possible.

You helped recreate some of the most iconic looks of the 90s – you must be incredibly proud of yourself and your team. Did you have a favourite look?
My favourite look had to Mel Bs leopard print catsuit. BANG LONDON hand-applied over 27,000 Swarovski crystals so it was absolutely a labour of love. The first time the catsuit went on stage in rehearsal the entire room gasped, including me. I have never looked at my own work in awe and this was quite an emotional moment…

Moving on to more costume production, can you tell us about your collaboration with W London for Pride?
W London Pride X BANG LONDON is without a doubt the biggest project I have ever done and it’s an honour to play such a big part at Pride in London. When I had the first meeting with Dylan at the W I remember thinking to myself ‘WTF are you doing this is such a huge task for such a small operation?!’ But rising to the occasion is what has me where I am today.

What message do you want to convey with the costumes for the Pride parade?
This is the 50th anniversary of the Stonewall uprising and although so much has been achieved, there’s so much that needs improvement. My goal with the W Hotel project is to create pieces that elevate and amplify the wearer, make them feel confident and proud in what they are wearing.

Are you taking inspiration from anywhere, such as your favourite queer fashion icons?
My team and I have looked back in history and reinterpreted Gods & Royals with a futuristic approach. The category is Gold Darling, with a few accent colours thrown in to really make it truly pop. The pieces are bold and extravagant: we are here, we are queer and you’re going to see us fucking shine.

Finally, if you could be remembered by one slogan, what would it be?
I’m super busy…