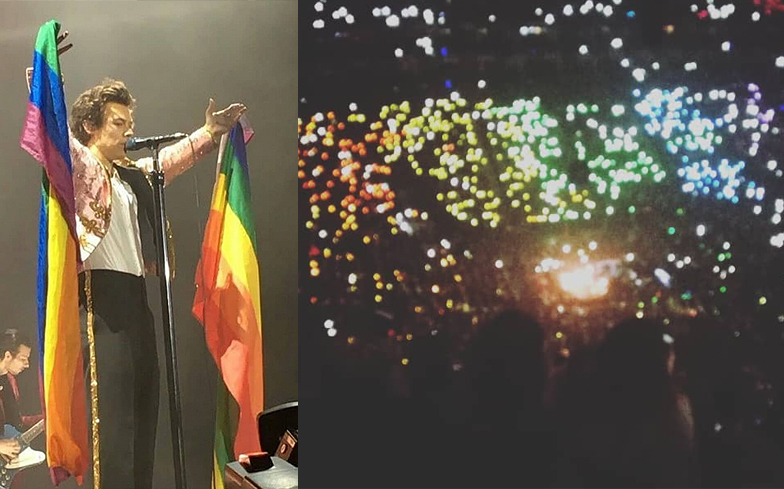 For his first solo headline show at London’s O2 Arena, Harry Styles made a colourful and empowering splash.

The former One Direction star managed to turn his 12,000-strong audience in a huge, shimmering, Pride flag, as the colours of the rainbow twinkled across the venue.

Before the show, a group of fans known as the Rainbow London Project gave the crowd rainbow tickets that they could attach to the flash on their smartphone cameras.

The colours were distributed throughout the audience so that when they were urged by the star to light up their phones, it created a rainbow.

The glittering spectacle took place during an acoustic rendition of his track Sweet Creature, and is yet another nod of support by Harry to the LGBTQ community.

“Can I just take a second to tell you that every single one of you in this building looks absolutely fabulous!” Harry told the crowd as he opened the show.

Absolutely loved @Harry_Styles’ LGBT tribute last night during Sweet Creature. Still not sure how he did it 🏳️‍🌈 pic.twitter.com/kVmfqZXeEh

“I’ve lived in London for about seven years now and I very much feel like I’m coming home now, thank you for being so welcoming to us.”

The star’s first headline arena tour of the UK is in support of his self-titled debut album, which reached No.1 in the UK last year.

However, the singer-songwriter has been performing new track Medicine as part of his current run.

The song has been hailed by fans as a “bisexual anthem” because of its lyrical content.

He also references “messing around” with both sexes, adding: “The boys and girls are here, I’m messing around with them, and I’m okay with it.”

Harry will return to the O2 Arena tonight for a second night at the venue, before taking his tour to the SSE Hydro in Glasgow later this week.

Related: Harry Styles addresses his sexuality: ‘I don’t feel like I have to explain myself’