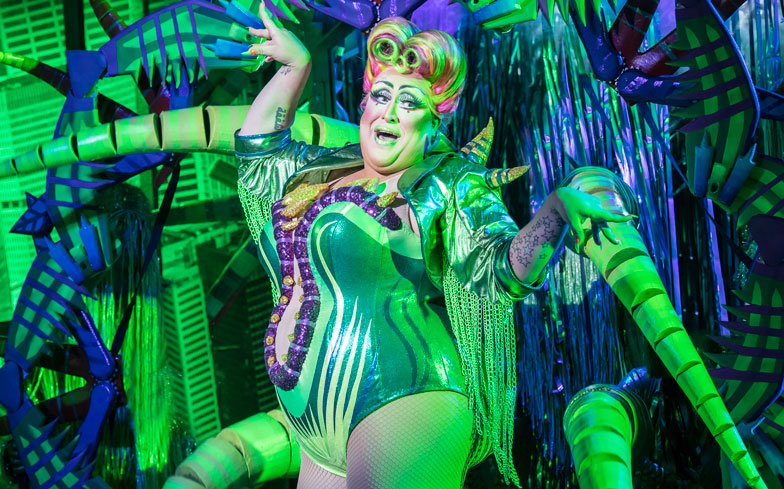 This might be a revival production of the classic Alan Menken and Howard Ashman 1982 musical, but there’s nothing dated going on in Maria Aberg’s stunning production at the Regent’s Park Open Air Theatre.

Redesigned by Tom Scutt and housed inside a gorgeous scenic design that treats its audience almost like a hawk as you peer over the the action, a trip to Skid Row has really never looked so sexy. Surprisingly, there’s limited colour going on beyond the greyscale and green, but maybe that’s why it works quite so well – a distant cry from what’s come before.

Far from a copying of the iconic movie, the Regent’s Park production serves up the sass with girl power rocking through from the start with Seyi Omooba, Renée Lamb and Christina Modestou as Crystal, Chiffon and Ronnette. Soaring in vocal ability as they narrate throughout and never really leave the stage, more is certainly best as we watch them borrow a splattering of original queer and Vogue ball moves. It’s just a shame they don’t get chance to sing just a few more numbers solo beyond the opening. Petition for the ladies to get solo numbers each? Carried.

Related: Reese Witherspoon has given an update on Legally Blonde 3

Matt Willis laughs his way to great success as an evil dentist that loves a good costume change, and Marc Antolin and Jemima Rooper are painfully adorable as wannabe couple Seymour and Audrey – cute duet of Suddenly Seymour and all. Jemima’s Somewhere That’s Green a real highlight of the night.

However, it’s US drag sensation Vicky Vox as the human-eating, evil plant Audrey 2 that ramps this up to a five-star show. From the sparkling costumes to the faaaaabulous voice and characterisation, this diva (sorry, plant) didn’t come to play. She came to slay! From the numerous chuckles off stage to an entrance that’d make even Mariah Carey envious, the genius casting of Vicky Vox show exactly why LGBTQ characters on stage need to happen evermore; diverse in storytelling and audiences’ clear lust for something new.

And as the wind sways the surrounding trees and the sun goes down, the rumbling nervousness of evil continues to grow as Audrey 2 demands her fix of human blood in order to survive. But will love prevail? Well, this musical might surprise you – much to its credit. Ohhh and the finale is worth the ticket price alone. Come thru Vicky Vox, again. (Are you getting bored of this Vicky gushfest, yet?)

Fuck the rules… feed the plant and watch the joyous (and fabulous) wonders of Vicky Vox grow and grow into a night at the theatre you won’t forget in a long time!