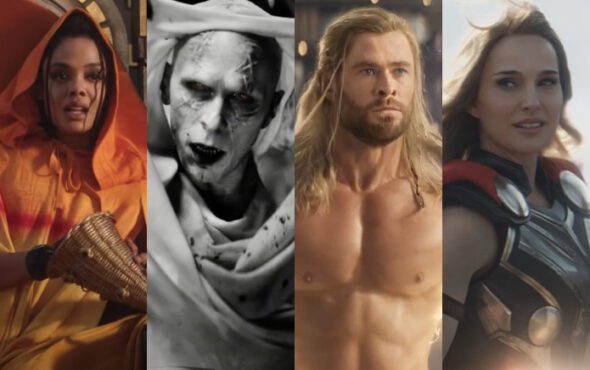 Marvel Studios has unveiled the first full-length trailer for Thor: Love and Thunder.

Directed by Taika Waititi, the fourth Thor adventure sees the return of Chris Hemsworth as the title character, Tessa Thompson as Valkyrie, Jaimie Alexander as Sif, Waititi as Korg, Jeff Goldblum as the Grandmaster and Natalie Portman as Jane Foster / Mighty Thor.

The trailer introduces Christian Bale’s menacing, stone-faced villain, Gorr the God Butcher, who can be heard saying: “The only ones who gods care about is themselves. So this is my vow: all gods will die.”

In one of the most viral moments from the clip, Russell Crowe’s character Zeus, aka the king of the Olympians, accidentally strips away all of Thor’s clothes, with the hero angrily responding: “You flicked too hard, dammit!”

The official synopsis for the upcoming blockbuster reads: “Thor: Love and Thunder finds Thor on a journey unlike anything he’s ever faced – a quest for inner peace.

“But his retirement is interrupted by a galactic killer known as Gorr the God Butcher, who seeks the extinction of the gods.

“To combat the threat, Thor enlists the help of King Valkyrie, Korg and ex-girlfriend Jane Foster, who – to Thor’s surprise – inexplicably wields his magical hammer, Mjolnir, as the Mighty Thor.

“Together, they embark upon a harrowing cosmic adventure to uncover the mystery of the God Butcher’s vengeance and stop him before it’s too late.”

The film will continue to explore the playful rivalry between Thor and Star-Lord, as established in Avengers: Infinity War and Avengers: Endgame.

In 2019, it was confirmed that Love and Thunder will finally explore Valkyrie’s sexuality after a scene was cut from its predecessor, Ragnarok, depicting the hero in bed with a man and woman.

“As new king, she needs to find her queen,” Thompson revealed at ComicCon. “So that will be the first order of business. She has some ideas. I’ll keep you posted.”

During a 2020 interview with Variety, Waititi was asked if Valkyrie will be “explicitly queer” in the sequel, to which he responded: “I think so. The IP is not mine.

“But with the actors, I feel whatever makes them comfortable — whether they feel like there’s a natural choice, or a natural way for that character to go — then I’m pretty supportive.”

Thor: Love and Thunder is set to be released in theatres on 8 July.

You can watch the electrifying new trailer here or below.