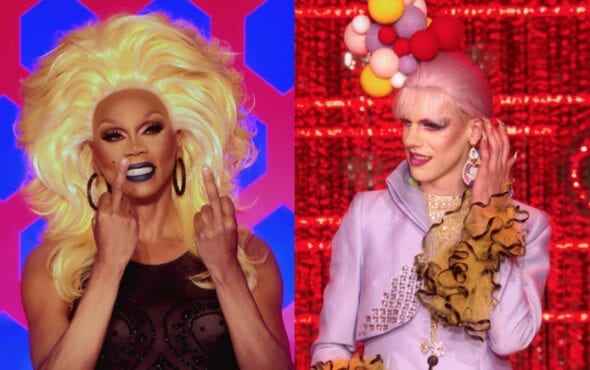 Utica has issued an apology for her “crude” jokes in the latest episode of RuPaul’s Drag Race.

Utica’s jokes about weight proved controversial in rehearsal, with Michelle Visage and special guest star Loni Love warning the queen that her material was too “mean” and “harsh”.

The star didn’t take their advice on board in the challenge, and proceeded to make whale noises towards Nina before telling her, “I thought you could speak whale,” and saying to Heidi, “You really remind me of the people I grew up with on the farm – gap-toothed and full of semen.”

Utica then mistakenly targeted the judges, calling Loni’s comedy career “hard to swallow”. Loni flipped the script, however, as she hit back: “You the one bombing!”

After asking RuPaul to stand up because she’s a “fashion icon” – referencing claims that the host changes into sweatpants when sat behind the panel, instead of full drag – Ru flipped the bird, leaving the rest of the contestants in hysterics.

Following her negative critiques from the panel, Utica admitted that she is still “learning what is comedy and what is offensive,” adding: “When it got off the rails, I started grasping for straws and trying to save myself.”

Utica’s performance in the challenge was met with mixed reviews from social media, with some viewers accusing her of “fatphobia”.

“As a large person who has struggled with my weight and have heard a lot of that same rhetoric, it’s disheartening to realize that humor rooted “in fact” is your go-to. I think your art is amazing, but please learn & grow from this,” said one fan.

Another wrote: “As a plus-sized woman I was extremely hurt by your words. I really wish the producers had chosen not to air them.”

However, the lack of criticism aimed at the other contestants was called out by viewers as Utica wasn’t the only person to make jokes about size.

“To everyone coming for Utica, keep the same energy with Gottmik, Rosé, Kandy, and almost every other remaining queen for also making the same jokes,” said one viewer. Shortly after the episode aired, Utica apologised for her performance and “especially” to Loni, Michelle and Nina, saying “the jokes were in bad taste and my attempt at roast humor was for the lack of better word, horrible.”

“Making fun of people’s size is not okay. I’m truly sorry,” she tweeted, before calling the episode “uncomfortable” in an Instagram statement.

“I apologize to those who were offended by my crude jokes. I feel saddened that themes of body shaming are still prevalent in today’s TV, and I don’t want to perpetuate any body negativity with tasteless jokes,” she said.

“Nothing was done with cruel intentions. Love each other and your bodies in every shape and size.”

Loni assured Utica that “no offense was taken” and that she thinks she’s “fabulous,” while Nina told the star: “Babe! It is a roast, and we were all in on it and fully aware it was a roast. Give yourself a little grace.”

Ultimately, Utica landed in the lip-sync smackdown for the third time this season, where she competed against her Freaky Friday teammate Symone.

The latter wowed the panel with her lip-sync to Ariana Grande’s pop classic No Tears Left to Cry, and Utica sashayed away from the competition in sixth place.

I want to apologize my performance in this ep of DR.
Especially to @LoniLove, @michellevisage, and @NinaWest, the jokes were in bad taste and my attempt at roast humor was for the lack of better words, horrible..
Making fun of people’s size is not okay. I’m truly sorry.

You are fabulous Utica… it’s a roast so no offense was taken… I really enjoy watching you this season!! https://t.co/KEjTKKSMNx

Babe!!! It is a roast, and we were all in on it and fully aware it was a roast. Give yourself a little grace.

On next week’s episode, the top five queens will flex their acting chops in the brand new sci-fi adventure, Henny, I Shrunk The Drag Queens!