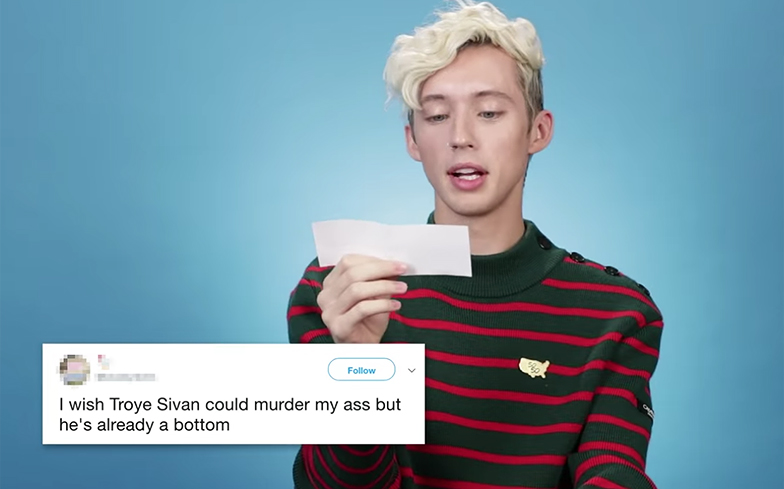 The out Australian singer-songwriter, who released his excellent sophomore album Bloom earlier this year, has one of the most dedicated followings of any modern pop star – and sometimes they border on inappropriate.

In a new video for BuzzFeed, Troye was tasked with reading out some of the most explicit messages his fans have sent him on Twitter, and the results are awkward, creepy, and hilarious all rolled into one.

“Troye Sivan more like lick honey off of me while singing Mary had a little lamb,” wrote one over-eager fan.

“Thats the most specific sexual fantasy I’ve ever heard in my entire life,” he joked back.

“I love Troye Sivan so much gosh choke me??? Hit me with a truck???” wrote another fan.

“That one’s not that bad. Thank you. That one’s actually very sweet,” he said.

But the big revelation of the video came when one Twitter user called Troye a bottom, to which he replied: “Not true, but whatever.”

Naturally, it sent fans into a bit of a frenzy.

“I’m more embarrassed [in front of] the people in this room than I am on the internet,” Troye joked at the end of the video.

“I feel really flushed. I kind of love it, but reading it out loud, like, I am so glad my mum didn’t come to this shoot.”

Watch the hilarious video below.