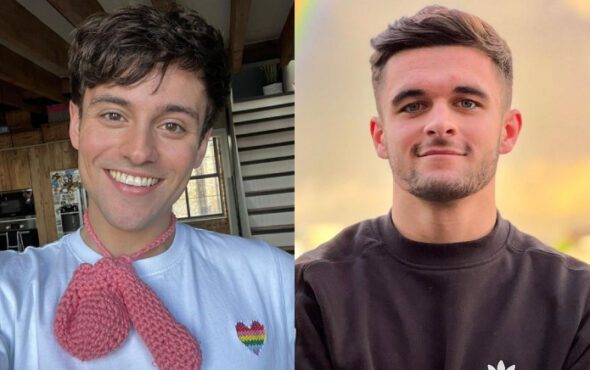 On 16 May, the Blackpool FC forward made LGBTQ+ history as Britain’s first active openly gay male professional footballer since Justin Fashanu in 1990.

In a heartfelt interview with Sky Sports News, the 17-year-old athlete gave insight into his coming out journey and why he hid his sexuality.

“For a long time, I’ve thought I would have to hide my truth because I wanted to be, and now I am, a professional footballer,” he explained.

“I asked myself if I should wait until I’ve retired to come out. No other player in the professional game here is out. However, I knew that would lead to a long time of lying and not being able to be myself or lead the life that I want to.

“Since I’ve come out to my family, my club and my teammates, that period of overthinking everything and the stress it created has gone. It was impacting my mental health. Now I am just confident and happy to be myself finally.”

Since his landmark coming out announcement, Daniels has received massive amounts of support from dedicated football fans and his industry peers.

In a recent interview with Daily Beast, Daley joined Daniels’ growing list of supporters when he described the groundbreaking moment as “incredible.”

“I think about what it means for any queer young kids growing up thinking now, ‘Maybe I do now have a space in football, maybe I will get in, maybe I will be welcomed,'” he said.

“It’s not just that the queer community has been so celebratory of it, but the fact of seeing people like [English national team captain] Harry Kane speaking out about how amazing it is.

“Straight footballers at the top of the game are commending him, and I think for visibility in the sport, it’s just incredible.”

The Olympic gold medalist then said that Daniels’ journey might also encourage other athletes, who may be closeted, to come out.

“It will also make it safer for other athletes to do so as well. The fact that Jake came out is a really powerful message to send,” he continued. “There is such a power in visibility and in telling or sharing your personal story.”

Daley’s comments come a few months after he expressed his hope for a Premier League footballer to come out during a Christmas message for Channel 4.

“Nearly 7% of people in the UK identify as gay or bisexual and there are about 500 Premier League players. That means statistically, there are enough players for three football teams running out on to that pitch every week,” he said.

“At least one gay man at every single club in the Premier League, living a lie. So, if I had one Christmas wish it would be that next year, that changes. That one impossibly brave Premier League player steps forward and says ‘I am gay’.