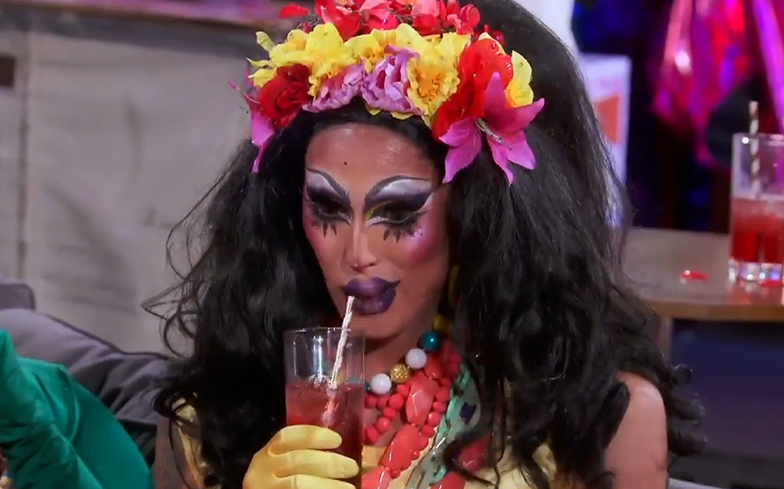 The queens did not hold back in Untucked. Like, at all.

For this week’s maxi-challenge, the 10 remaining contestants starred in the longest-running drag queen medical drama in HERstory: Gay’s Anatomy. Later, they sashayed down the main stage in their most sickening cape-inspired couture.

After slaying the challenge, Aiden Zhane, Gigi Goode, Jackie Cox, Jan and Widow Von’Du were declared safe, while Sherry Pie – who was disqualified at the start of the series – landed her second win of the season. That’s all we will say on that.

Brita, Crystal Methyd, Heidi N Closet, Jaida Essence Hall and Nicky Doll were then critiqued on the main stage, and tasked by RuPaul to throw one of their fellow bottom queens under the bus by stating who should go home.

While the bottom queens spilt T, the safe queens kiki’d backstage and revealed their, urm, confusion at Aiden’s position in the competition. It was rather calm, collected and totally non-dramatic… until Brita and Nicky’s arrival.

“I am serving you looks every single time, compared to other people,” expressed Brita. “It sucks being up there with your sisters to say who’s gonna go home when you think someone else, in this room who is safe, should be going home instead.”

After being asked who she was referring to, Brita went on to say: “Aiden. Initially when I came into this competition, I said that I was not going to compare myself to anybody, because I am only in a competition with myself.

“But that ain’t true, sis. This is a competition, and I am working so hard and I’m really giving everything that I have to do this, and I do not think that Aiden should have been safe. In this last challenge, again, I felt like I was carrying you.”

Aiden, who clearly had enough at this point, hit back: “Well bitch, at the end of the day I am sitting here safe.” Her response prompted both Jaida and Nicky to chime in, with the latter stating that she should be in the bottom instead of Jaida.

“Can I say one thing to get this out of the way for the rest of the fucking season?” an understandably fiery Aiden replied. “From day fucking one of this competition, I have had pretty much everybody in this goddamn place coming for me.

“Regardless from who or whatever, I have been taking it from all directions.”

Nicky and Brita then confronted Aiden over “sleeping on the couch” and not putting effort into last week’s ball-inspired runway, for which she was once again declared safe, while Brita lip synced for her life against Rock M. Sakura.

Heidi, who had previously sashayed to the book of the room to prepare for her lip sync, became the first one to come to Aiden’s defence. “It doesn’t fucking matter okay?” she shouted. “The bitch is safe! Leave her the fuck alone.”

We need to protect Heidi at all costs. She is pure, she is wonderful and… UGH! We just love her so much. But did the drama stop? Nah, course not. Jaida, Nicky and Aiden continued to raise their voices and honey, it got severe.

Drag Race fans were living for the drama on social media, with many hailing the episode as one of the entertainting in the show’s HERstory. One fan wrote: “THANK GOD I DIDN’T GET ONLY HALF THE STORY THIS WEEK.”

Another opined that this week’s episode was “the wildest Untucked since Yvie went to throw down with Vanjie.”

Check out all the best reactions to this week’s Drag Race Untucked below.

Drag Race Untucked can be watched on WOW Presents or Hulu in the United States.

Unfortunately, it won’t be available to stream in the UK until later this year. A representative for Netflix said: “It’s looking like Untucked will arrive all at once at the end of the season – sorry! We’ll keep you updated if that changes.”