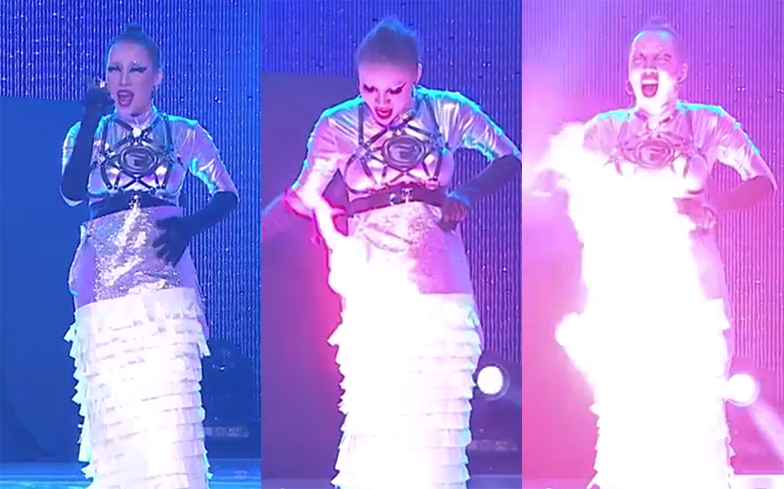 Her pussy was on fire. LITERALLY.

The latest episode of Drag Race Thailand saw one of the queens lit-er-ally set herself on fire on the runway.

Kandy Zyanide sashayed down the main stage in a fierce silver paper dress, lit a match on her bottom half and became engulfed in flames. It was, without-a-doubt, one of the most shocking scenes in Drag Race HERstory. And yes, that includes the American version.

The contestant was originally eliminated in the fourth episode of the second season, but subsequently returned to the series alongside Kana Warrior, in the first double return of the franchise since Alyssa and Tatianna made a comeback on All Stars 2.

She won the runway, but was unfortunately harmed in the process, and had to spend the rest of the episode applying burn cream to her face.

Watch the sickening runway below.

Drag Race fans were quick to praise the star on social media. Check out the best reactions from Reddit below.

the_mock_turtle: I’ve got to watch this fucking show. Every clip I’ve seen puts the original Drag Race to shame.

craistann: also she’s a returning queen and shes won 2 challenges in a row upon returning.

thecptz: OMG kandy, i was v scared for her. it was v risky. i knew she must be hurt but hope she doesn’t get hurt that much.

1dbad: That fire malfunction horrified me. But I must admit, it made for one hell of a gag.

geekpurple123: fuck me….her dedication is something else.

geekpurple123: I’m both terrified and excited for what she might do for her finale number.

Vzave: My winner is going to get that crown with sweat and blood, literally.

atomicxblue: I almost had a heart attack watching her slide down the banister. I don’t want to see any of our queens hurt for our entertainment.

hyperforce: Kandy was peeling glue off her outfit and pretending to eat it, lol.