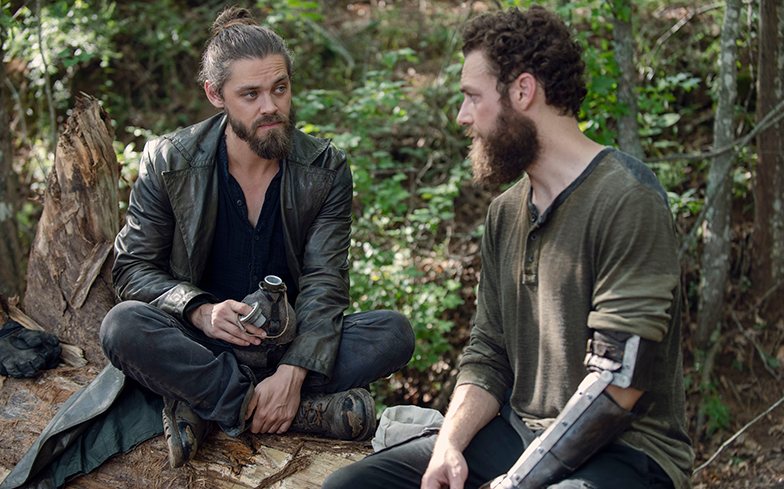 “They probably were romantic at some point during the six-year time jump.”

Last year, fans of The Walking Dead were left in uproar when the series killed-off one of its only LGBTQ characters.

During the show’s ninth season, fan-favourite character Jesus (Tom Payne) met his demise at the hands of The Whisperers. Fans were disappointed because in the comics, Jesus embarks on a romantic relationship with Aaron (Ross Marquand).

Although the two characters became closer as the series progressed, they never had a chance to explore their feelings on-screen. Later, in an interview with THR, Payne expressed disappointment at the lack of gay storylines for Jesus.

“It wasn’t ever even explicitly mentioned,” he said. “[Jesus’ sexual orientation] was just one scene with Lauren in season seven. It was an amazing responsibility, and I was happy to take it on. But I was disappointed it wasn’t in there more.”

However, Marquand believes that the two characters had a relationship off-screen.

At Comic-Con Paris, the actor said of their romance: “I think it was kind of alluded to, in points. Tom Payne and I, we discussed [it], and we thought they probably were romantic at some point during the six-year time jump.

“We didn’t know how that was going to look, but we sort of alluded to it. We decided it only made sense, because of their camaraderie, and they’re very similar. They’re both the recruiters for their respective communities, they have a lot in common.”

It will be the final season for Gurira, who has portrayed Michonne since the show’s third season.

The Walking Dead airs Sundays on AMC. It premieres one day after in the UK at 9pm on Fox.