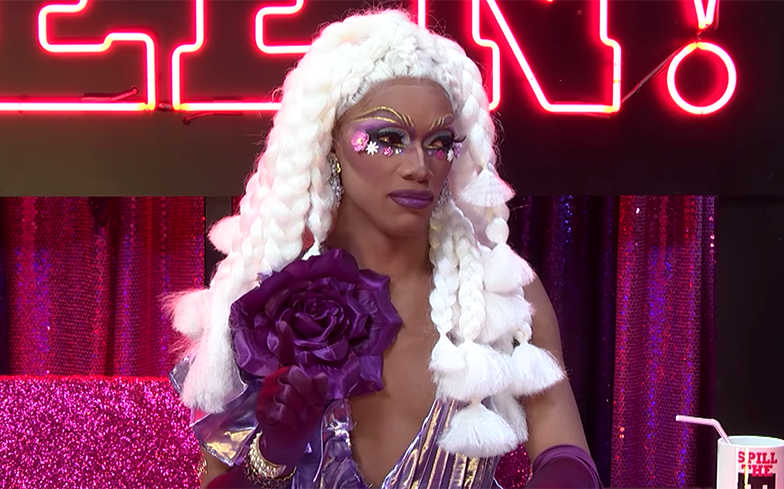 “You want me to argue about drag and race with RuPaul on RuPaul’s Drag Race? No thank you.”

Drag Race star The Vixen has explained why she walked off the show’s season 10 reunion.

In an interview with Johnny McGovern for the latest episode of Hey Qween, the legendary performer said the production team wanted her to make “good TV” for the finale, but she wasn’t willing to provide them with the drama.

“I had not planned on having any type of epic battle with RuPaul,” she admitted.

“I knew they wanted to get to all the drama. I think I was disappointing to the producers because they were like, ‘How you feeling?’” to which she responded, “‘I feel good, I just wanna get across the finish line.’

“I was trying to stay in such a zen place. They were like, ‘Well, we still need good TV’, and I was like, ‘Look elsewhere. Haven’t you gotten enough from me?’”

The Vixen told McGovern that her boyfriend and assistant were supposed to be seated next to her for the lip sync finale, but they were reduced to sitting upstairs on the balcony.

Understandably, this upset her because they were both there for emotional support.

“‘I’m not going back in there until I find my husband,'” she told them.“’We’re done. I’ve given you your ratings. Can you be nice now? I’m not competing anymore, you don’t have to treat me like I’m in a cage still.’”

Before the season 10 contestants all hit the stage for the reunion (which was actually filmed after the finale), The Vixen contacted her fellow queens of colour via message to request that they remain civil, because of their upcoming performance of Black Girl Magic.

“They just could not get a rise out of me, and so then, it just got to this point where Ru was the one trying,” she continued. “I was like, ‘It’s time to go.’ Nobody goes on Drag Race to argue with RuPaul.

“You want me to argue about drag and race with RuPaul on RuPaul’s Drag Race? No thank you, I’m not doing it. That was never the option, and they were not expecting that. Ooh that was fun!

“By the time a producer came upstairs, I was out of drag. I was putting on jeans, ‘Hey how you doing?’ And I still wasn’t angry. It’s not the greatest career move, but it’s what I needed to do for myself at the time, and I think people forget about that.”

During The Vixen’s time on the series, she was commended by the LGBTQ community and queens of colour for raising important, much-needed issues about the way black queens are treated by the fandom.

For our October issue, The Vixen spoke with fellow Drag Race contestant Shea Coulee about the reunion, racism within the fandom, and how the media ‘trains’ us to not trust people of colour.

“I went to the reunion, wanting to celebrate the good things that came out of my experience,” she told Shea.

“I was voted on ‘most influential’ lists because of the things that I spoke about on the show, and I got a lot of love and appreciation from the community for bringing up issues.

“That part of my experience was really skirted over during the interview, and it became very clear that it was going to be a witch hunt. I didn’t deserve that, and I didn’t have to stick around for it.”

She continued: “People don’t realise drag is about identity, and so queens of colour, when we start presenting our drag persona, the first thing that you’re gonna notice is that we are of colour.

“In this country, with this media, we’re taught not to trust black people. We see shootings on the news every day, we see stereotypes that don’t represent us as a community, and it teaches people to favour white queens and white people in any situation. So if there’s an argument, you’re already trained not to believe the person of colour.”

Read our full interview with The Vixen here.