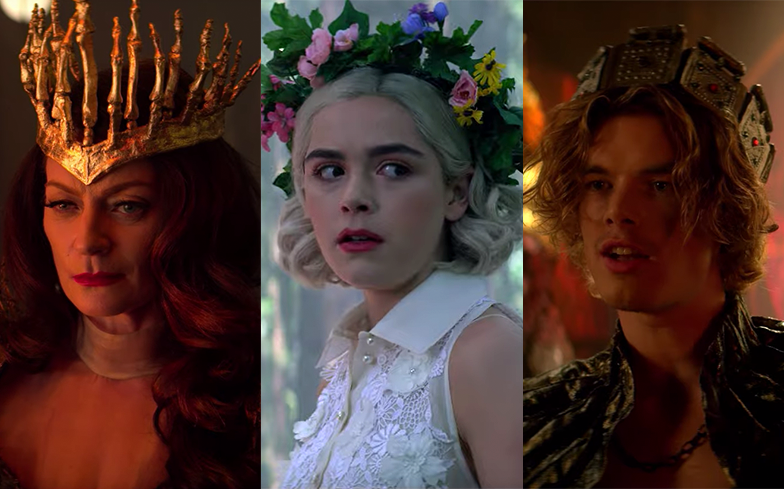 The first official trailer for Chilling Adventures of Sabrina season three has landed and whew lordt… that’s how you do it.

Kiernan Shipka returns as the sharp-witted title character in the two-minute preview, and showcases the growth of her powers as she aims to defeat Satan and bust out her beau Nicholas (Gavin Leatherwood) from hell.

Theo (Lachlan Watson), who came out as a trans man in the second instalment, can also be seen with his first love interest of the series as he shares an intimate embrace with a new male character on a ferris wheel.

The season comes less than a year after the second instalment, which received universal critical acclaim for its dark tone and treatment of its LGBTQ characters – especially Theo and Sabrina’s pansexual warlock cousin, Ambrose (Chance Perdomo).

Last year, showrunner Roberto Aguirre-Sacasa recently shared a behind-the-scenes photo from the set of the upcoming season of a mysterious woman in a black cloak alongside the caption: “The dread banshee has arrived, but which Spellman will die?”

The banshee comes from Irish mythology, and is a female spirit who heralds the death of a family member by screaming her lungs out – Alyssa Milano memorably played one in the third season of Charmed. But a dread banshee? Who knows?

There’s four major Spellman’s in the series: Sabrina, Hilda, Zelda and Ambrose – is the show seriously about to chop one of them off? Obviously, it won’t be Sabrina, so it looks like it will be one of her aunts or her cousin…