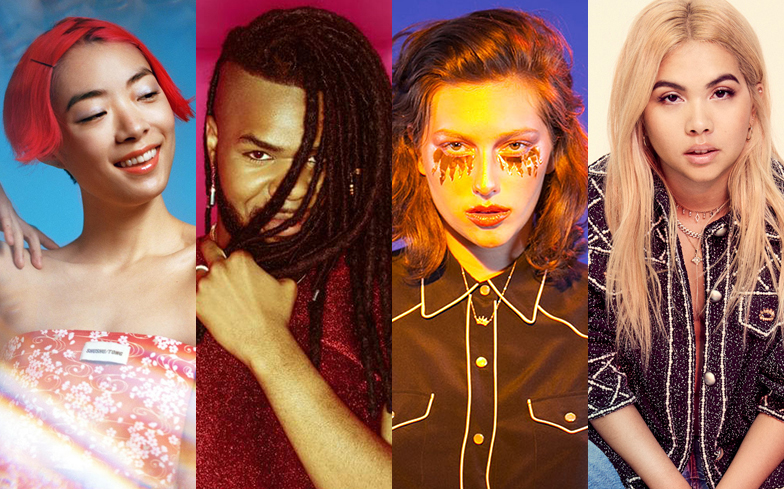 There’s no debate when it comes to the fact that LGBTQ anthems are the best – and 2018 has proven that fact and then some.

Over the past 12 months we have been treated to an incredible amount of fierce and fabulous pop bops from all corners of the queer community.

Whether it’s been the comeback of queer faves Years & Years, Troye Sivan and Janelle Monae, or up-and-comers like King Princess, L Devine and FHAT, our playlists have been crammed with LGBTQ excellence all year round.

The only rules we had for our Very Best Singles of 2018 list is that there could only be one mention per artist – even if a few of them have delivered plenty more amazing bops in the past 12 months – and they’ve had to have been released as an actual single. If we’d included album tracks as well we would have been here until next Christmas sorting the list.

Oh and we’ve only named our song of the year, which you can find out at the end of the feature. All the other entries are listed in alphabetical order. It’s Christmas, so we’re not here for ranking absolutely everybody when the talent is this good.

So, without further ado, we present to you the 20 very best queer singles of 2018…

Blonde ft. Bryn Christopher: Me Myself & I
When we get left on our own during a night out at Sink The Pink because our friend has got off with a fit guy, we usually head home feeling sorry for ourselves in a box of nine nuggets from McDonald’s. Bryn Christopher, however, took that very concept and turned it into an empowering dance anthem with the help of electronic duo Blonde. With extra influences of Spice Girls and RuPaul, its a storming club banger that we had on repeat over the summer.

Calum Scott: If Our Love Is Wrong
After soaring to fame on the Britain’s Got Talent back in 2015, Calum Scott’s dreams of becoming a popstar were coming true. However, he was facing a whole different nightmare in his personal life. Having struggled with coming out back in his teens, he was faced with the prospect of doing it all over again, except this time in the harsh glare of the media spotlight. If Our Love Is Wrong, which opens his debut album Only Human, hears him come to terms with his sexuality, and his fears of coming out on such a public scale.

Chelcee Grimes: Just Like That
After years of writing hits for other stars – including the likes of Kylie, Kesha and Dua Lipa, no less – Chelcee Grimes got her chance to step into the spotlight in 2018. Her debut single Just Like That is brimming with playfulness, has an earworm of a chorus, and echoes those addictive hits of the mid-00s. It’s left us very excited to hear more of her next year.

Christine and the Queens: 5 Dollars
Nobody has quite captured the very essence of that expansive and euphoric 80s sound with such consideration and elegance than Christine and The Queens in 2018. A shining example of it in full effect is 5 Dollars, which thrives on its uplifting piano lines, echoed beats, and addictive melody.

CupcakKe: Crayons
Now this is what you call an ally. Rising rapper CupcakKe is serving the T hot on Crayons – a bouncy anthem for her LGBTQ fans. “Girl on girl they like ‘Yup’ / But when it’s man on man they like ‘yuck’ / Motherfuckers need be go on with that shit / Bitch, we ain’t playing along, no skits.” Music to our ears.

Emily Burns: Bitch
If you picked up the September issue of Gay Times you’ll have been introduced to one of our favourite new artists whose pop songs of same-sex love are setting the streaming charts alight. Emily Burns’ big single release this year was Bitch; a bouncy bite back at an ex who eradicated her from her life after they split. It’s largely all tongue-in-cheek, but we think we can all relate a little bit to what Emily went through here.

FHAT: One Night At The Disco
This US duo relocated to Berlin and this year started to put out music under the guise of FHAT. Their second offering, ONATD, is an acronym for One Night At The Disco and comes with everything you’d expect from a song with that title. Smooth vocals, an effortless groove, and some subtly anthemic electric guitar has meant its been on heavy rotation on our playlist in 2018.

Hayley Kiyoko: Curious
An earworm hook, effortlessly cool production, and a ferociously epic dance routine to boot: no wonder the kids hail Hayley Kiyoko as “Lesbian Jesus”. Curious is a stellar effort from the American singer, who packs her videos full of same-sex romance and desire. With her debut album Expectations just released, we are incredibly excited to see what 2018 has in store for her.

Janelle Monae: Make Me Feel
Prince’s influence is clearly felt here, but Janelle Monae is a singer-songwriter who can take that inspiration and mould it into something that’s uniquely hers. Make Me Feel is buoyant and sexy, while also retaining throwback soul that will ensure it becomes a timeless anthem in her back catalogue.

Keiynan Lonsdale: Kiss The Boy
Fresh from stealing hearts in his role as Bram in coming out movie Love, Simon, Keiynan Lonsdale has used the opportunity to release this smooth R&B number celebrating same-sex love. “I’ve been afraid of my place, of this way, of my feelings,” he starts over minimal production which lets his silky vocal shine. By the song’s end he is embracing his heart’s desire: “Love is a game we deserve to play out loud.” Couldn’t have put it better ourselves.

Kim Petras: Heart To Break
We’ve kept a close eye on Kim Petras’s blossoming career since she started releasing a new single a month last summer. The tracks have been getting better and better, but Kim kept the best as a Valentine’s Day treat for fans. Heart To Break is a shimmering 80s-inspired bop, with a strutting beat that’s infectiously moreish than a box of Cadbury’s Milk Tray.

King Princess: Talia
Rising singer King Princess got off to a fantastic start earlier this year with her single 1950, but it’s follow-up track Talia that has us falling hard for her brand of wistful pop. “But four drinks I’m wasted / I can see you dancing, I can lay down next to you,” she sings to her ex girlfriend. Oh Talia, what did you do?!

L Devine: Like You Like That
All eyes are on this English singer-songwriter in 2019, but the star has been delivering the bops and them so over the past 12 months. Our standout favourite is Like You Like That; an infectious pop diary entry to young love. “I can’t even concentrate, because I don’t know what you might say,” L Devine confesses. We’ve all been there.

Merlot: Bad For You
With a voice as rich as their name suggests, Merlot’s debut single Bad For You has been one of our favourites all year. It’s a slice of luscious R&B anchored by Merlot’s smooth and soulful tones, serving as a striking introduction to them as a recording artist.

Rina Sawayama: Cherry
Rina Sawayama has quite literally become the dictionary definition of ‘come thru!’ in 2018. Her brilliant single Cherry is as effortlessly infectious and sickeningly stylish as its accompanying music video. This is exactly what pop music should be.

RuPaul ft. Drag Race All Stars 3 cast: Kitty Girl (Remix)
Don’t try and tell us that you haven’t spent the best part of 2018 trying to master the choreography for the All Stars 3 Kitty Girl remix, because we won’t believe you. Four fierce queens really delivered on a revamped version of RuPaul’s catchy pop bop, making it one of the biggest standout moments in Drag Race HERstory.

Tommy Genesis: 100 Bad
Self-described “fetish rapper” Tommy Genesis burst onto the scene this year with a self-awareness rarely seen in pop. The star owns her sexuality and raps about the fuck she wants, and that isn’t better demonstrated on 100 Bad. Considering that Charli XCX jumped on a remix, it’s fair to say Tommy’s doing something very right.

Troye Sivan: Bloom
When it came to Bloom, Troye Sivan put all of his queerness on display and we loved every second it. From the song’s subject matter (#BopsBoutBottoming) to the airy pop production, as well as Troye living his best femme fashion life in the accompanying music video, it was beautiful to hear and see an LGBTQ artist truly celebrate what makes them, them.

Years & Years: All For You
Considering their 2015 debut album Communion was something of a pop masterpiece, Years & Years were up against high expectations this year with the follow-up. Palo Santo really delivered, however, and not more epically than on summer single All For You. As far as sad-bangers go, this gave us the turmoil of an abusive relationship over a sound bed of shiny synths and a chart-ready chorus.

Gay Times’ best queer single of 2018 is… MNEK: Tongue
We’ve been big fans of MNEK for years, but without any doubt, Tongue is his most fierce single to date. Brimming with confidence, intent and desire, it’s a pop bop you’ll find yourself declaring your love for for years to come. As for that music video: there aren’t enough fire emojis in the world.