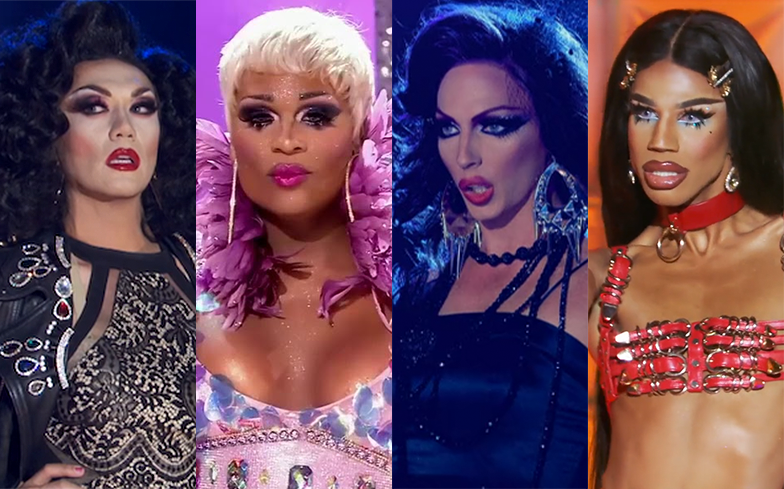 Is it Jujubee? Trinity K. Bonet? Or Madame LaQueer?

Rumours have been swirling around the upcoming RuPaul’s Drag Race All Stars 5, and the possibility of a format change.

There has been speculation regarding the format and one most common seems to involve past lip-sync assassins being involved in some capacity. To coincide with this, we have listed the top 10 best lip sync assassins in Drag Race herstory.

I took into consideration the amount of lip sync wins but mostly who I felt embodied the songs and commanded the stage. How many times did she lip sync? 7

She’s arguably been in some of the messiest lip syncs in Drag Race herstory, but Shangela is still a lip sync assassin nonetheless. If we look past the mess that was her lip sync against Venus D-lite in season three, Shangela really came into her own on All Stars 3 (Shangela was ROBBED!), where she dominated every lip sync, including her iconic Freaky Money lip sync against Trixie Mattel. Shangela ties with BenDeLaCreme for the record of having competed in the second most number of lip syncs, with seven. Both are right behind Trinity the Tuck, who has competed in nine. Season nine’s lip sync assassin Peppermint takes the number nine spot here. With a season of mainly lacklustre showdowns, Peppermint’s lip syncs were a much needed boost for a season of queens giving up. Peppermint came equipped with sickening dance moves and perfectly timed ruveals to demolish her opponent. I mean, she literally assassinated Cynthia Lee Fontaine, who can forget that? One of the most iconic queens to grace the Drag Race stage comes in eighth place. During both her runs on Drag Race, Alyssa has been a part of arguably the top two lip syncs of all time with season five’s Cold Hearted against Coco Montrese and AS2’s Shut Up and Drive against Tatianna. From shablam to split, Alyssa has got it covered. Her Alyssa-isms are what make her so memorable, and you know she means business when she struts to the back of the stage ready to slay. Some might say Kameron should be lower down on this list, and I understand, because let’s be honest, all her lip sync performances are identical. But let’s not forget, she is one of very few queens who were able to get through a single season winning three or more lip syncs, and she won them for a reason. The side split has become synonymous with the silent assassin. How many times did she lip sync? 3

My personal favourite, Naomi Smalls, struts her long legs into the number six spot on my list. If it wasn’t for AS4, I wouldn’t even consider putting Naomi on this list. Naomi SLAYED her lip syncs on All Stars to the surprise of many. She used her legs and flexibility to her advantage, with surprisingly a lot of camp to catch the eye of RuPaul and to crown her a “winner baby”. Both of her lip syncs that season will go down in history as some of the best lip sync performances of all time. Her Adrenaline lip sync against Gia Gunn should’ve been a double save, sue me. The chunky yet funky Latrice Royale lands fifth on this list. Latrice is one of very few queens who don’t rely on stunts to slay a lip sync, she truly embodies the song with raw emotion and character. On AS4 she showed a different side to her lip syncing ability, with splits and hair flips but no one can ignore how incredible her Natural Woman performance was back in season four. Another favourite of mine, Manila Luzon narrowly misses out on a top three position. Manila’s another queen who truly embodies a song, the iconic Macarthur Park back in the season three and her How Will I Know lip sync in All Stars to name a few, the latter always puts a smile on my face. Manila’s campy style really made her stand out from the crowd and a needed palate cleanser from all the death drops and splits we see time and time again. How many times did she lip sync? 4

Coco Montrese lands third on my list. Another queen to join the three lip sync win club, Coco knows how to werk a stage and her lip syncs are some of the best in Drag Race herstory. I still can’t get over her legendary lip sync against long time frenemy Alyssa Edwards, where she performed one of the tightest lip syncs ever seen on Drag Race. How many times did she lip sync? 3

Just missing the top spot is Trinity K Bonet. She is lip sync perfection, and there is not one song Trinity couldn’t slay. She really knows how to capture the essence of a song and give a very controlled and entertaining lip sync. All three of Trinity’s lip syncs are some of the best and there’s only hope that we get to see her on the Drag Race stage again in the near future. Possibly as one of the guest lip sync assassins for AS5? (If it’s true.) It’s no surprise that the OG lip sync assassin Jujubee is number one on this list. There is no argument that Jujubee shouldn’t be number one. She’s one of very few queens (excluding winners) to never lose a lip sync, and she is tied with Shangela and Latrice for the most wins. Jujubee exudes so much charisma when she’s performing, in particular her Black Velvet lip sync where she was rumoured to be very drunk at the time. Rumoured for AS5, we can only expect more fabulous lip syncs from Jujubee. Long may she reign as the best lip syncer in Drag Race herstory.