Tatianna opens up about Drag Race, her beef with Tyra Sanchez, and fierce debut album T1 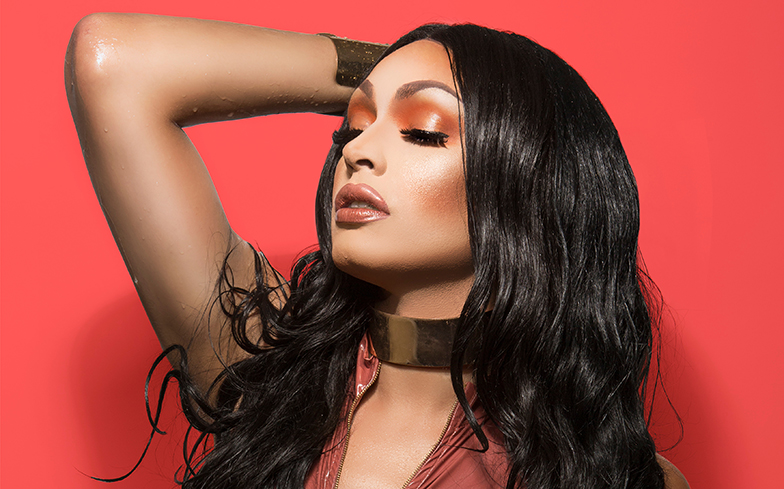 If there were ever a spokesperson for the power of All Stars, it’s Tatianna.

After appearing on the highly-underrated second season of RuPaul’s Drag Race – which featured her infamous feud with winner Tyra Sanchez – the drag sensation returned for All Stars 2, which shot her straight into the ‘fan favourite’ hall of fame, an achievement arguably more lucrative than taking home the crown itself.

Not one to waste an opportunity, Tatianna’s debut album T1 is hot off the press, which sees her serve club-ready beats, fierce lyrics, and of course the odd spoken word segment. Oh, and she’s also got a fragrance coming out. Werk!

To celebrate her first full-length assault on the charts, and ahead of her appearance at DragWorld 2018 in London later this year, we caught up with the Drag Race alum to talk about her love of music, drag going mainstream, and Tyra Sanchez’s choices…

You’re going to be at Drag World UK this year – what is it about drag conventions that makes them so popular?
I feel like it has a lot to do with drag becoming such a mainstream situation, which I think is so great. The fandom is crazy, they are very fanatical, and they have very strong feelings about a lot of different things, and it’s so great that drag can evoke such a passion from people. Also, how often do you get to walk into a convention centre full of drag queens of all shapes and sizes?

Tyra Sanchez was recently banned from DragCon in Los Angeles for her inappropriate comments on social media – why is it important for Drag Race queens to be good role models for their young fans?
Well, I think that anyone in the public eye period should try to be as good of an influence and a role model as possible. It’s not our job, per se, to do that, but it’s better if we do. I think that with the way things are in the world right now, we need positivity, and we definitely don’t need to take after the grossness happening. Drag queens are supposed to be fun! They’re supposed to take your mind off all the drama. And also, a very large part of the fandom is kids. A very large amount of the fans that come to these conventions are like 10, 11, 12 year olds, and so we always want to make sure we give them a safe space. Especially when they come to a drag convention – that should be the safest of places.

Feel free to pass if you don’t want to comment, but what was your reaction to the situation with Tyra?
Oh no, it’s fine, I mean technically it was to do with me – although I still don’t quite understand why – but the whole reason she got banned is because she refused to apologise for threatening to like, I don’t know, beat me up or something. I’m not sure what the threat was specifically. But when I heard that she had gotten banned, I was like, ‘You know what? They gave you an opportunity to just apologise and denounce violence, and you didn’t’. So when they banned her, it was like, ‘Well, okay, that was your choice to make, and you made it’.

Choices…
Right? Choices, shit. So I think they made the proper decision in that regard. Again, with the things that are happening right now, we can’t take any type of threat idly. People threaten these things, and then they actually do them. We can’t run the risk of someone threatening a group of people or a convention and thinking, ‘Oh they’re not being real about it’, and then it happens and we’re like, ‘Damn. We could’ve done something’. From the outside, it seems that coming back for All Stars was a brilliant move for you. But as someone who’s lived through it, how would you say it’s changed your career?
Doing All Stars completely transformed my career. There’s a big difference in the amount of people who watch the show from 2010 to 2016, so it took my career to, not even the next level, but like the next three levels. I’ve been able to travel and meet so many different people from different places, and I’ve had opportunities I never would’ve had without it, like my new album which just came out – that whole situation I would’ve never really been able to do without All Stars. So it’s very much made me more accessible to the people, which of course I appreciate.

There was quite a big gap between your first and second appearances on the show. Did you notice a change between both experiences, especially with the way things worked behind the scenes?
I mean, the way the things worked on set was very much the same. You get up and you go in early in the morning. I think our hours were just a little bit shorter for All Stars – for season two we’d stay on set for a little bit longer. When it came to staying in seclusion, that was different, because on season two we only had to stay within the hotel, so we could hang out in each others’ rooms, and watch TV together, whatever we wanted. But with All Stars it was like, ‘No, you’re staying in your room, and you’re not to leave it, and if you need anything you slip a note under the door and someone will do the rounds and read whatever request you have’. So that was a little different. But it was kinda nice, in a way, to disconnect from everything.

Would you consider returning for another All Stars in the future?
I’ve been asked that before, and at this point I don’t know. I feel like All Stars 2 was so great, and I had such a great experience, so part of me wouldn’t want to… not ruin that, but change that vibe. But then the other side of me thinks, ‘An opportunity is an opportunity’, and especially in the last year and a half I’ve been coming from a place of ‘Yes’ with any opportunity that comes my way. Because things don’t always come around twice – or in this case three times. So I’m not sure what I’d say. I’d definitely think about it. Nothing’s off the table!

You mentioned earlier how Drag Race is becoming so mainstream now – do you think this is 100% a good thing?
I don’t really see the negatives. I see other people voice how it’s negative, but I don’t see it that way. I mean, for us as drag queens – whether you’re on Drag Race or not – we put on all of our drag to feel like a star, to feel like the most fabulous thing to ever walk the earth, and having a show like this be mainstream only makes that more tangible for everybody. So I think it’s great. Make it more mainstream! Put it on network television. Who are you rooting for on season 10?
Ooh. Right, let’s see who’s left. I’m rooting for Miz Cracker, she’s hilarious. Eureka’s doing really well this season, and I feel like she has really gotten the hang of just herself in a competitive environment, and she just feels lighter than on her original season, so I’m really enjoying watching her. Aquaria’s looks are ridiculous! I wish I was that thin to be able to pull all of that off.

You look great as you are.
Well, I mean, I’m a solid middle finger, and she’s a pinky.

How much of being good at Drag Race is about being a great drag queen, and how much is about making good TV?
I think that it’s equal parts, in all honesty. It’s not a pageant. I’d say it’s a television show with aspects of pageantry. You have to be entertaining, because they’re making a television show for entertainment. So you can look amazing, or you can do great in a challenge, but if you don’t have that spark that catches the eyes of everyone watching at home, you’re not going to make it. You have to be able to connect, and sometimes it’s difficult to connect through filming a reality TV show, because you’re going through a whole bunch of emotions of being stressed and scared. So yeah, I think it’s equal parts.

Your debut album is out now, which is so exciting. What was that creative process like?
It’s a pretty cool situation! I spent the last year working on it, I started recording last May and it took a while because I was touring and writing while I was on the road, and then I’d come home and record and go back on the road and write more. I wrote nine of the 11 tracks, so that’s pretty awesome, and I have two features on there, one with Salvadora Dali who’s an amazing performer from my hometown of Washington, and I have a feature with Cazwell, who’s a good ol’ rapper from New York, and that was exciting as he’s actually worked on Drag Race before.

Was music something you always wanted to do? Or did the realisation come after Drag Race?
Music’s something I’ve always wanted to do since I was a kid, I just didn’t think it was possible. Because I liked performing, I was always big on choreography and talent shows, but usually with movement not so much with my voice. I had actually recorded a song or two on my own, just fiddling around with music software before I’d even tried out for Drag Race, so it was something I’d been dabbling in. And then I did season two and they made us sing live, and I was like, ‘Oh, I can do this. I can certainly do this in a recording studio scenario, in a controlled setting’. But yeah, very soon after that I released a few singles, but that was a different time and that was just for fun. This time I’m taking it a lot more seriously. I’ve had two music videos, shooting them is so much fun, I never thought I’d be able to do that.

That seems like the most fun part of it…
Oh yeah, making a visual to something you’ve written, and to have this idea in your head that all come together in reality, is pretty cool. I’m kind of checking off my bucket list of what I want to do in life right now. Like, ‘Oh, an album, a music video, a tour’. I wanna do all of that stuff.

What else is on your bucket list?
One thing that’s about to happen – which is something I never thought would happen – is that I’m releasing a fragrance within the next few weeks. It’s called Choices, naturally, and I did it in conjunction with Xyrena who has worked with Trixie Mattel, Willam, and Pearl on their fragrances. I’m very excited about that.

Tatianna will appear at DragWorld 2018 in London from 18 – 19 August. For more information and to purchase tickets, click here.