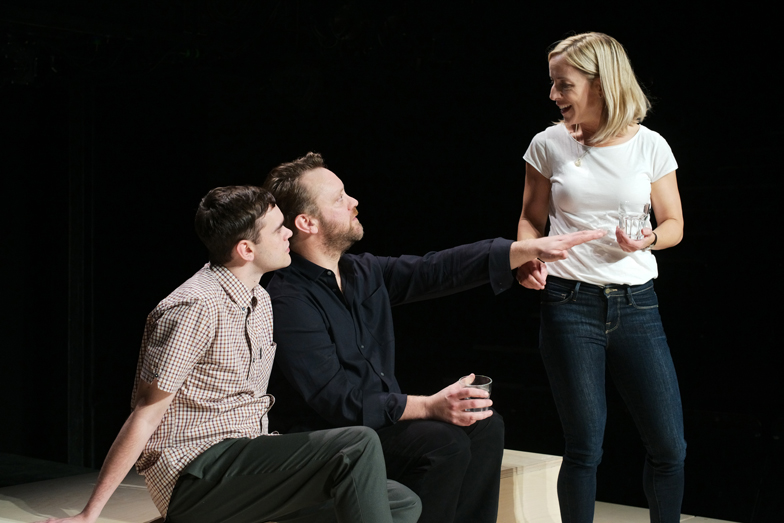 Written and directed by Nina Raine, Stories has premiered at the National Theatre.

Nina Raine’s previous play, Consent, was met with critical acclaim when it debuted last year; the subsequent success meant that it enjoyed a well-received West End transfer. Her latest work, Stories, has just opened in the same space that Consent debuted. It concerns the story of Anna, who is trying to solve the dilemma of being 39, single, and wanting a baby.

Anna (Claudie Blakley) doesn’t have a bad life – she has a successful career, a supportive family and a comfortable middle-class existence. However, she has recently broken up with her boyfriend, and is now concerned that, with her 40th birthday looming, time is running out for her to meet someone, fall in love and start a family. She sets out on a quest to find a man to father her child, be that by persuading an ex or a potential new suitor to donate their sperm, or by turning to an online sperm bank.

There is plenty to enjoy here. Her recent ex-boyfriend, alongside all her previous partners and potential suitors, are played by Sam Troughton – frequently extremely funny, his performances as the try-hard musician and the painfully-cool film director are smart and witty. Blakley also injects a healthy dose of humour into many of her lines, too; watching her carefully but awkwardly build towards asking the various men quite an unusual and difficult question is both cringe-worthy and highly entertaining.

Yet it falls short of being great. While Blakley is generally quite strong, occasionally she’ll come across as over-eager, to the extent of potentially trivialising a serious issue. Troughton also impresses for the most part, although sometimes slips into comedy cliches. In most scenes their dynamic works well together, but some seem to stretch beyond the realms of possibility – a few of the matches just come across as too far-fetched.

Ultimately we felt Stories’ main failing, however, is that its central character is under-developed. We thought there was so much more to learn about Anna; as a result it’s difficult to feel too involved in her story, or sympathetic towards her plight.

It’s a shame as Stories gets many things right. It’s an interesting tale touching on a topical issue, with some strong acting and a handful of hugely entertaining scenes. The supporting cast are solid throughout and for the most part it tackles a difficult subject matter intelligently and with sensitivity. It’s a fun but ultimately flawed exploration of fertility, with just a few too many shortcomings preventing it from being great.