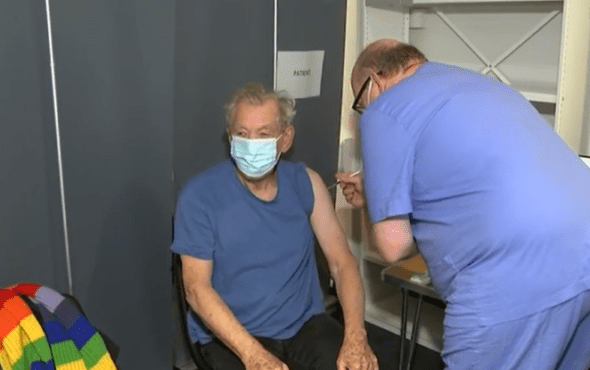 Sir Ian McKellen has joined the list of people who have received the Pfizer Covid-19 vaccine.

The iconic actor got the jab done at Queen Mary’s University Hospital in London.

McKellen shared his excitement and brought up the importance of getting the vaccine stating: It’s a very special day, I feel euphoric.”

He continued: ” Anyone who has lived as long as I have is alive because they had previous vaccinations, the take-up amongst the older generation will be 100 percent, it ought to be, because you’re having it not just for yourself but for people who are close to, you’re doing your bit for society. ”

The Lord Of The Rings star is part of the first group of people, that are able to receive the vaccine due to being high-risk.

Healthcare workers, people living in care homes, and the elderly are all considered high-risk.

The 81-year-old then went on to show his gratitude for the NHS staff that have been working the frontlines during the ongoing pandemic.

“That’s the real bonus of all this, to watch and see what works in this country and what doesn’t work – and it seems to me the NHS is right at the top of the list for institutions that do work.

“Of course, I know I wouldn’t be alive if it wasn’t for the NHS,” he said.

Sir Ian McKellen now joins the other high-risk celebrities who have received the vaccine.

‘I really hope that, as more people get vaccinated, we will move further along the path back to a more normal way of life.’
⁰Sir @IanMcKellen joins the thousands of people who have now safely received the first dose of the #CovidVaccine. https://t.co/1e3nCAUFcB pic.twitter.com/FFW6jrKqEg