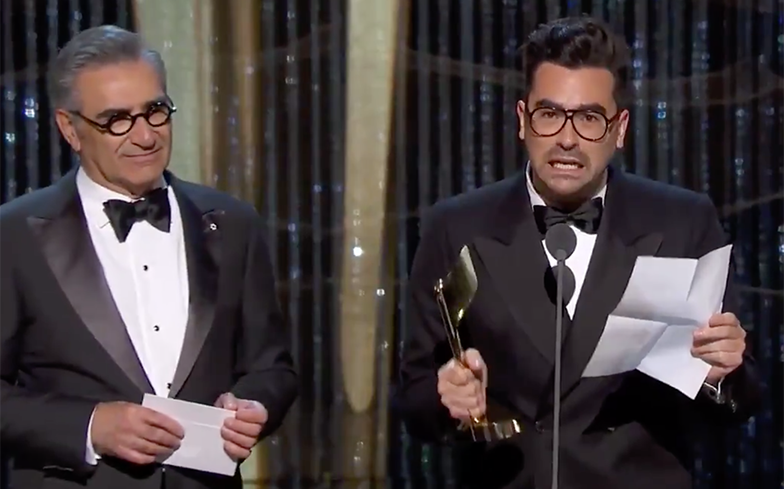 “Wouldn’t we all be happier if we were able to love out loud?”

The Canadian actor accepted the coveted award for Best Comedy Series for Schitt’s Creek, which has received universal acclaim since its premiere for its portrayal of pansexual character, David (played by Levy).

“In Schitt’s Creek we are writing a world that examines the transformational effects of love when the threat of hate and intolerance has been removed from the equation,” said Levy, who created the series alongside his dad, Eugene Levy.

He continued: “While that’s not a reality for many, our goal is to shine a light out there that asks the question, ‘What if it was?’ Wouldn’t we all be happier if we were able to love out loud?”

The series also picked up an award for Best Lead Actress in a Comedy for Catherine O’Hara’s iconic performance as Moira Rose.

"Wouldn't we all be happier if we were able to love out loud?" ♥️♥️♥️@danjlevy accepts the award for Best Comedy for @SchittsCreek. #CdnScreenAwards pic.twitter.com/SMWJImAhND

Last month, it was revealed that Schitt’s Creek’s upcoming sixth season will be its last.

“We are so grateful to have been given the time and creative freedom to tell this story in its totality, concluding with a final chapter that we have envisioned from the very beginning,” Dan and Eugene wrote in a statement.

The series stars Eugene, Dan, Annie Murphy and Emmy Award winner Catherine O’Hara as the Rose family, who lose their fortune and have to take refuge in a town they bought as a joke, Schitt’s Creek.