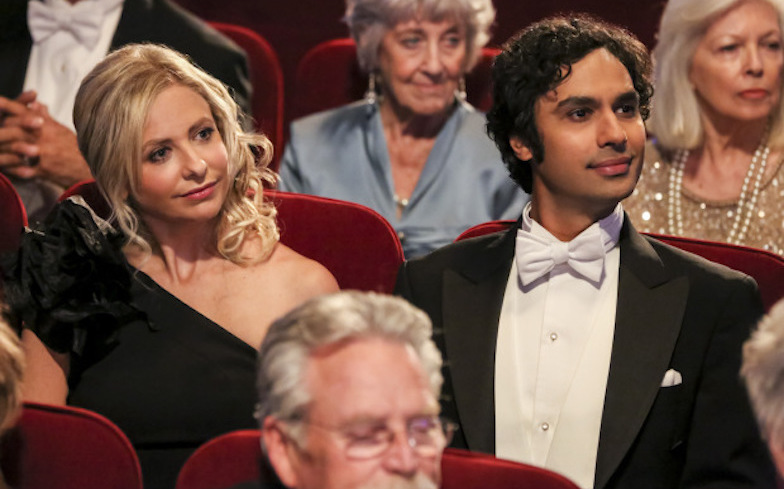 The Big Bang Theory came to end last night after 12 seasons, and it included a special guest star in Buffy the Vampire Slayer herself, Sarah Michelle Gellar.

The Emmy Award winning actress made a cameo appearance in the series finale as Raj’s date to Sheldon and Amy’s Nobel Prize ceremony, which was met with shock from the former, who says: “Is that Buffy the Vampire Slayer?”

Throughout the series, the show’s male characters have voiced their love for the iconic fantasy drama on numerous occasions, with Leonard even trying to make Penny watch the first season, to no avail.

Steve Holland, showrunner, said in a statement: “We knew that Raj wouldn’t have anyone to sit next to on the flight to Stockholm. And [series co-creator] Chuck [Lorre] was like, ‘Maybe there’s somebody fun that he’s sitting next to.’ And then we started talking about who that could be.”

He added: “I’ve been a fan of Buffy for years. It’s probably the show I’ve watched more than any other. I think a lot of our writers are fans of Buffy. [Having Sarah in the finale] felt like a fun, like, deeper-reel pull that would be exciting to us and exciting to these characters.”

When they approached Gellar to guest star, she told Lorre that she and her family were massive fans of the comedy.

“At that point, we felt like it was going to work out,” he continued. “Then it was just a matter of figuring out the logistics and the scheduling.”

Shortly after Gellar’s appearance, she uploaded a photo of the moment to Instagram alongside the caption: “It may not have been a date for me and Raj, but it was certainly an important date for @bigbangtheory_cbs and I was so excited and honored to be a part of it! Thank you for having me #bigbangtheory @kunalkarmanayyar.”

Fans of Buffy the Vampire Slayer and The Big Bang Theory shared their love for Gellar’s appearance on social media. Check out the best reactions below.

Wow just when I thought I was going to be able to get away with never having to watch an episode of Big Bang Theory, they put fucking Sarah Michelle Gellar in the finale. Well played, nerds.

It had an Everybody Loves Raymond type of ending with everyone at their signature dining area…the sofa and coffee table. I will miss them all. Sarah Michelle Gellar as Raj’s date was epic. #BigBangTheory

Buffy the Vampire Slayer in #BigBangTheory!!!

I legit don’t understand why/how @SarahMGellar was in the final episode of big bang theory. It’s very confusing to me but it makes me very happy. #Buffy

Sorry to see #BigBangTheory come to an end, but the writers, producers, cast, and crew brought it to a very satisfying conclusion. The cameo by Sarah Michelle Gellar was a fitting touch and homage, as I’m sure many of the writers were inspired by Buffy the Vampire Slayer.

@SarahMGellar was in the @bigbangtheory finale and I think that was the best cameo EVER. #MyQueen #Buffy pic.twitter.com/2w5k0t81hW

My mom love Big Bang Theory and I love Buffy. I cannot wait to watch the series finale with her. https://t.co/19fG4ccS1j

Sheldon's acceptance speech at the end had me in tears. Thank you all associated with the #BigBangTheory for 12 years of joy.
Shout out to #Buffy!

"Is that Buffy the Vampire Slayer?" That just made my entire night! #BigBangTheory

— The Thoroughbred Passionista (@tbrdpassionista) May 17, 2019

Literally sobbing over #BigBangTheoryFinale Said to hubby, not sure if I was this emotional when #Buffy ended. And then @SarahMGellar appears on the show. Cue extra waterworks of seeing her at the end. My heart is so full. #BigBangTheory #Thankyou

So satisfied with the @bigbangtheory finale. And it had my other all-time fave! #Buffy @SarahMGellar #stillcriedlikeababy

In an interview with The Hollywood Reporter, the American actor said it was time for him to leave because it had become “more difficult”.

He continued: “There was no factor; there was no situation that I was like, well I’ve had enough of that. No. There was nothing like that. It was just… when you know, you know. And you’re susceptible and thrown around by the whims of your own existence and getting to a certain age and your life changes and suddenly you just think different.

“It has been fascinating to think about who I was 12 years ago. And sometimes when I have trouble learning a line or saying a line of Sheldon’s right now, it’s hard to know why specifically. But it’s like, you’re not the same person you were.

“There is a possibility that this actually became more difficult for you in a way. And I don’t know what that means but it’s like you just change.”