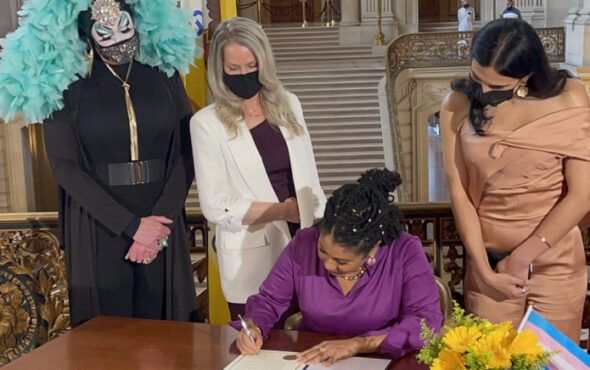 August will now be known as Transgender History Month in San Francisco, which will recognise the work still remaining to achieve trans equality.

The month is set to honour the braveness of those advocating for trans rights, as well as the vibrancy of trans culture more generally.

“People like to give government credit for all these gains,” Breed said as she spoke to the crowd at City Hall. “But I got to tell you, it’s women like this who are the reason why we have been able to launch extraordinary programs.”

The newly established tradition will be the first of its kind nationwide, with Breed declaring it a testament to the work done by trans activists both in the past and now.

The announcement came in the same month as the 55th anniversary of the Compton Cafeteria Riots, which was an uprising against the proprietors of Compton’s Cafeteria and the San Francisco police led by Black and brown trans women and drag queens.

It is estimated that around 60 people fought back against police after they started harassing patrons at the venue in August 1966, which saw tensions erupt and the fight for equality begin in San Francisco after someone threw a cup of hot coffee in an officer’s face.

It took place three years before the Stonewall Inn riots, meaning it is often recognised as America’s first demonstration for LGBTQ+ rights.

For the first time in our country, today we declared the month of August, Transgender History Month in San Francisco.

Our transgender community that has been a beacon of resilience and strength. This month we will reflect and celebrate the progress we’ve made. pic.twitter.com/G0RpLmdMNj

Tamara Ching, an activist who was at the 1966 riot, attended the ceremony at City Hall and was given a Certificate of Honour on behalf of the city.

“As we have proven, we are capable of transcending what is imposed on us, to attain lives in which we are authentically and exquisitely us,” Jupiter Peraza, director of social justice and empowerment initiatives for the Transgender District, said in a speech to the crowd.

“We are our own most prized possessions.”