Samira Wiley reveals the origin behind naming her daughter George 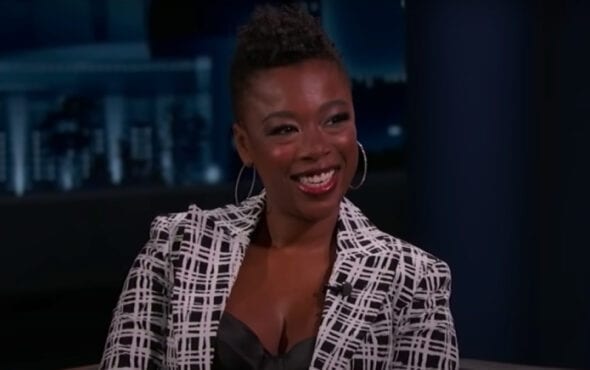 Samira Wiley opened up about her daughter George and the origins behind her name in a new interview.

Sitting down with Jimmy Kimmel, the new mom gushed about the newborn and revealed that she and Lauren Morelli had the baby four and half weeks ago.

“People are very confused, some people, by it,” she said.

“We got to teach the new generation about this because I wish that I had some really in-depth story to tell people about George, cause I know that’s what people want and got to give the people what they want.”

Wiley went on to reveal that she and Morelli picked the name because they thought it was cute.

“I just think it’s really cute. I tried to do some research, I found out in the 1800s it was a girls name, but people don’t believe me when I say that,” she explained.

The pair first shared the news about their daughter, George Elizbeth, in a heartwarming social media Mother’s Day post.

“Happy 1st Mother’s Day to my beautiful wife, who four weeks ago today after labouring for almost 3 days gave birth to our first child—our gorgeous daughter, George,” the Handmaid’s Tale star captioned in a post on Instagram of herself and Morelli holding the baby’s hands.

The actress added: “Welcome to the world, babygirl. We love you and we thank you for giving us the best 1st Mother’s Day two ladies could ask for.”

Morelli also shared a post announcing the news. “Four weeks ago today, our daughter came into the world and changed everything. We are so happy, so grateful, and so tired,” the screenwriter wrote.

Wiley and Morelli both married in 2017 after meeting on the set of Orange Is the New Black. Morelli was a writer for the hit show and Wiley took the role of the fan-favourite character Poussey Washington.