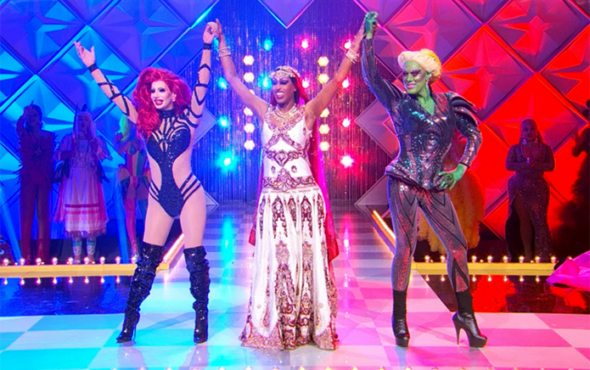 This week, Priyanka, Scarlett Bobo and Rita Baga competed in a jaw-dropping showdown for the crown. With the assistance of singer-songwriter and producer Ralph, the top three queens wrote, recorded and performed an all-new remix of RuPaul’s classic, U Wear It Well.

After delivering one of the most sickening (and consistent) group numbers in Drag Race HERstory, they sashayed down the runway in their Coronation Eleganza-inspired ensembles. One by one, they pleaded their case to the judges, who decided that all three queens needed to lip-sync for the crown.

To the beat of Love Inc’s eurodance anthem, You’re A Superstar, Priyanka, Scarlett and Rita gagged viewers with splits, kicks and flips – particularly Scarlett, who avoided the bottom two the entire competition and used the opportunity to flex her full skillset.

Ultimately, Priyanka triumphed over her sisters to the title of Canada’s First Drag Superstar and a cash prize of one hundred thousand doollahz.

“I’m living proof that hard work pays off, and that even when you make mistakes, you can still be a winner,” Priyanka said as she accepted her crown and scepter.

“To the kids who are watching, I know you used to watch me somewhere else, but now I’m home. I’m Canada’s first ever Drag Superstar! I’m rich! And I get to represent the country all around the world. I’m so thankful.”

She ended her speech by saying she’s “so proud to be Canadian,” and that she’s going to use her platform to “make this country so proud”.

Priyanka’s win was met with praise from fans and fellow Drag Race alumni.

Shea Couleé, who won the fifth season of Drag Race All Stars, praised the diverse slate of winners from the franchise this year, writing: “I feel like years from now, people will refer to this period of Drag Race as the Melanin Dynasty.”

Lemon, who sashayed away from Canada’s Drag Race in fifth place, tweeted: “Ugh my best friend won. I love @thequeenpri so much I’m so happy.”

Drag Race season 11 winner wrote: “Nobody cares if you get spoiled by the internet because get off the internet. Also CONGRATULATIONS @thequeenpri!!!

I feel like years from now, people will refer to this period of Drag Race as the Melanin Dynasty.

i love @thequeenpri so much i’m so happy 🥺✨

Spoiler alert: nobody cares if you get spoiled by the internet because get off the internet….

The entire first season of Canada’s Drag Race is now available to stream on BBC iPlayer.