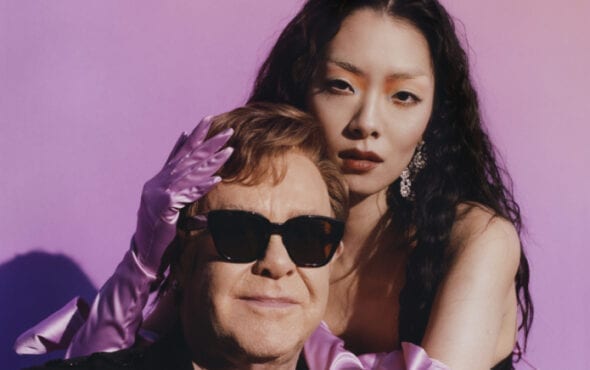 Rina Sawayama is releasing a special rendition of Chosen Family with Elton John.

The 12th track from Rina’s critically-acclaimed debut album, Chosen Family is a powerful ode to the star’s LGBTQ+ family.

“We don’t need to be related to relate, we don’t need to share dreams or a surname. So what if we don’t look the same?” Rina croons on the song, which has since become an LGBTQ+ fan-favourite.

On 12 April, Rina confirmed that Elton – who has been one of her most vocal supporters over the past two years – has recorded vocals and will play the piano on a remix, which premieres on Zane Lowe’s BEATS1show this Wednesday at 5pm.

“It was such a joy and honour to rework Chosen Family with the legendary Elton John. The song means so much to both of us, and recording it together was such a special experience I will never forget,” said Rina.

“I got shivers when I heard his voice through the monitor and became emotional when he added the piano parts. Elton has been such a huge supporter from before the album, and when we finally met to record this song we clicked from the get go.”

Rina added: “I hope people can hear the magic!”

When we spoke to Rina for our Elevate campaign, the star said Chosen Family – originally produced by Danny L Harle – was written for queer fans who have been ostracised from their families due to their sexuality or gender identity.

“A lot of my fans understand how important chosen families are, because they themselves have chosen families,” she said. “I hear so many heartbreaking stories from people being kicked out of their homes.

“It’s a very queer term and it’s so universal; that feeling of maybe not belonging.”

The album features singles such as STFU!, Comme Des Garçons (Like The Boys), XS, Bad Friend and Lucid.

You can listen to the original version of Chosen Family here on Apple Music or below.