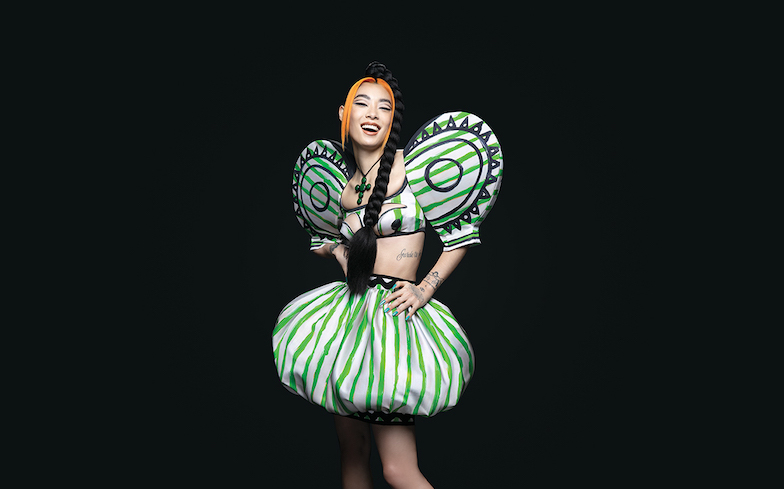 “There’s no references to heteronormativity or heteronormative love on this album,” Rina Sawayama refreshingly admits down the phone. “I’m just… very bored by it.” (She’s not alone.)

This April, the British singer-songwriter will release her long-awaited debut album, an album that is (in this journalist’s opinion) one of the most exciting and innovative debuts in recent memory. Oh, and we have to add: queer as hell. While a lot of artists tend to cater to what radio stations will play with mainstream Max Martin, Stargate and Greg Kurstin-esque produced pop anthems to achieve chart success with their first record (no shade, we stan all three), Rina has continued to flip the metaphorical script with a string of personal and socially conscious bops. “You only get a debut album once,” she responds, when we question why she hasn’t ventured down the typical pop-girl route. “I want to see a bit of a change in the musical landscape and I wanted to be a bit tongue-in-cheek. I’ve always wanted to make songwriting better.”

If you’re a fan of Rina’s soaring pop anthem Cherry or the sugary R&B-stylings of Cyber Stockholm Syndrome, then there’s a lot to enjoy on Sawayama. The album’s most recent single, Comme Des Garçons (Like The Boys), is a pulsating club banger that pays tribute to the gay men who have supported the songstress through her career, while Paradisin’ is a sparkling pop number that could easily accompany Wreck-It-Ralph’s Vanellope von Schweetz as she glitches through a game of Sugar Rush. However, a majority of the album sees Rina take influence from 2000s rock, with one act in particular proving to be a major inspiration: Evanescence. “I think it’s because they’re so deeply uncool,” laughs Rina. “I like making music that’s inspired by a genre or an era that everyone just loves to erase. I don’t think people are like, ‘Yeah! 2000s nu-metal was so cool!’ No one is saying that. Or like, ‘Stadium rock was so cool! Hair rock was so cool!’ 2000s music was so chaotic at times, and I really dig that. That was when I was truly living my best life.”

The Evanescence influences can be felt most on album opener Dynasty, a gospel number that evolves into a Bring Me to Life-esque, gothic-metal banger (we can already imagine the video for this). “I wanted to mix the sounds so it felt like it was in a church,” she explains. “My performance life started in the church because I went to a C of E school. I used to perform there as part of a gospel choir to like 800 people on a Monday morning – so random I know! I was trying to bring that drama.” The song itself delves into Rina’s complicated relationship with her family. The star sings: “I’m losing myself in the darkness of the world, catch me before I fall. Saving myself is all I’ve really known.” Although Rina has proudly discussed her pansexuality over the years and been out to her friends since her early 20s, she is yet to have a serious conversation about the topic with her parents because Asian households “don’t really talk about anything that might lead to a conversation about sex”, saying she accepts it as a cultural difference. “[Coming out] was so important to me because it’s a big part of an internal struggle of mine, and I’m obviously proud of it, but at the same time there was this really deep feeling of shame,” she told us last year. It makes sense then, that as well as discussing her fraught relationship with her biological parents, that she would pay tribute to those who have accepted her for who she is with a track called Chosen Family.

The song, which is one of the softer, poppier moments on the record, sees the star croon in a future lighters-up tour moment, “We don’t need to be related to relate, we don’t need to share dreams or a surname. So what if we don’t look the same?” It’s extremely personal to Rina, but will also resonate with her queer fans who have been ostracised from their own families due to their sexuality or gender identity. “A lot of my fans understand how important chosen families are, because they themselves have chosen families,” says Rina. “I hear so many heartbreaking stories from people being kicked out of their homes. It’s a very queer term and it’s so universal; that feeling of maybe not belonging.” The theme of family continues with soon-to-be stadium classic Who’s Gonna Save U Now?, in which she tells the story of a family member who she has “burned bridges” with, and aforementioned track Paradisin’ which channels “Ferris Bueller-vibes about my teenage rebellion against my super strict Asian mum”.

It’s not solely family-oriented, however. Synthpop number Fuck This World provides a commentary on climate change and excess consumption, while new jack swing and 90s R&B-inspired bop Love Me 4 Me is an empowering anthem that quotes RuPaul’s classic mantra, “If you can’t love yourself, how can you love somebody else?” But out of all 13 tracks, it’s the album’s lead single STFU! that packs the most punch. Produced by longtime collaborator Clarence Clarity, the nu-metal banger is a blazing attack on racist stereotypes and white male privilege, with its brilliant music video visualising the rage in Rina’s head as she goes on an infuriating first date with a man who compares her to Lucy Liu and Sandra Oh, asks if she’s ever been to Wagamama’s and expresses shock that she sings in English. “I feel like it’s specifically talking about these East Asian problems but in a very British sense of humour way,” says Rina.

The song received a glowing reception from fans and critics, with the YouTube video flooded with comments from fellow East Asian women who have experienced similar situations with (primarily) straight, white men. “I love that we’re finally acknowledging there’s a significant problem with women of color being fetishised,” wrote one fan, while another said: “This is a revenge piece for everyone who’s ever been fetishised. THANK YOU.” Rina reveals that she even had a “quite… sweet?” comment from someone who had an epiphany, of sorts, from watching the video. “This guy said, ‘Oh no, I think I’m that guy. Thank you for making me realise it.’ I was like, ‘Well done for that self-awareness!’” She adds: “There were also some comments by people who were like, ‘This isn’t a big deal. Don’t date interracially if you can’t handle it!’ Oh my god. I screenshotted all of the comments and made it into a post, and I think I’m going to start using them to promote the song.”

It’s a topic that hasn’t been discussed much in the industry, but like we said earlier – because it bears repeating – Rina has been socially conscious from the very start. Her 2018 track Flicker encourages those who’re told they have ‘unusual’ names to be proud of their heritage, while Tunnel Vision addresses the anxieties that come with the age of technology and social media. Rina isn’t afraid to intertwine music and politics, unlike other artists who refrain from doing so out of fear of not being palatable for mainstream radio. She tells us: “I always think there’s a responsibility with artists to discuss topics such as these in new ways. Even Dorian Electra, who has been in GAY TIMES as well, the way they talk about toxic masculinity to me is so interesting and new and their videos are fucking hilarious. I’m very much inspired by people who aren’t afraid to use satire in their art.” But it turns out that politics and satire isn’t for everyone – who knew? Last year, Rina was in the final stages of signing a record deal with a major label (who she won’t name) with contracts signed, legal fees paid – all that. As soon as they heard STFU!, they instantly kicked her to the curb. Whether that’s down to the nu-metal sound or potentially offending fragile white executives with her commentary on racism in Western culture, Rina doesn’t know. “I think they wanted more Cherry, that vibe,” she opines. “I think they wanted me to go down that road.”

While most artists would be devastated to lose a record deal, Rina was relieved. “I was just like, ‘You know what? It’s just not meant to be.’ I let it go quite quickly. When you’ve gone through something in your life, you become quite good at dealing with adversities like that. It wasn’t devastating, let’s just say. I wouldn’t want to sign with a label that didn’t believe in me.” Now, Rina is signed to Dirty Hit, which she calls a “silver lining”. The label, who also look after acts such as The 1975, Wolf Alice and The Japanese House, have given Rina artistic license to do as she damn well pleases, and it helps that she’s surrounded by like-minded queer people of colour. “We’re all part of the same message,” she says. “People who I’ve surrounded myself with since I was younger are reflected in my work now, which is awesome.”

Dirty Hit’s faith in Rina is so strong they’ve even allowed her the freedom to reshoot the video for Comme Des Garçons. In January, Rina was criticised on social media after uploading a preview of her hairstyle in the clip, which referenced “90s Harajuku cyberpunk and Japanese Shimenawa”. Although she was adamant before and after the shoot that the hair was not styled as box-braids or cornrows, she was accused of Black hair appropriation. “I apologise to any fans that I have unknowingly offended and I’m truly grateful that you took the time to let me know,” Rina said at the time. “I love having conversations with you that allow me and others to learn and grow, and I hope you trust me with your concerns and as I’m always willing to listen.” A few weeks have passed since, and although Rina echoes the same sentiment, you can feel a sense of frustration and disappointment in her voice. As a strong advocate against cultural appropriation, Rina’s intention was never to offend. “It’s really hard because I’m like, ‘It’s my culture! Ahh!’ It’s such a tricky one,” she says. “I just don’t think Twitter is the right place to have conversations. That was my main take away from the whole situation. I would also say that there’s a lot of cross points in different cultures, and because of the global reach of social media, it can be construed in different ways.

“On one hand, I really just want to say, ‘This is the way it is. This is my inspiration,’ but I totally understand that hair is a sensitive issue. It’s made me not look at Twitter and the comments, but I really want to interact with my fans. It was just a war zone.” From now on, Rina is separating the work she does as an artist with her personal feelings to “exercise” her mental health. “It’s been really hard, because I have genuine connections with my fans,” she sighs. “When you start out, people are very positive about you, but as you get bigger… You can’t please all seven billion people in the world. I mean, some people hate Beyoncé.” That is true. But do you know who Rina will please with this album? Die-hard fans who have been with her since the start; the gay men she pays homage to on Commes Des Garcons, the outcasts she represents on Chosen Family and Western people of colour who finally feel seen after the release of STFU. Rina said she “felt really powerful” after making the album, and we’re certain her fans will too after listening to it.

Rina Sawayama is the sixth artist to be featured as part of a new collaboration between GAY TIMES and Apple Music called Elevate; a campaign to support and platform LGBTQ music talent as they break through into the mainstream.