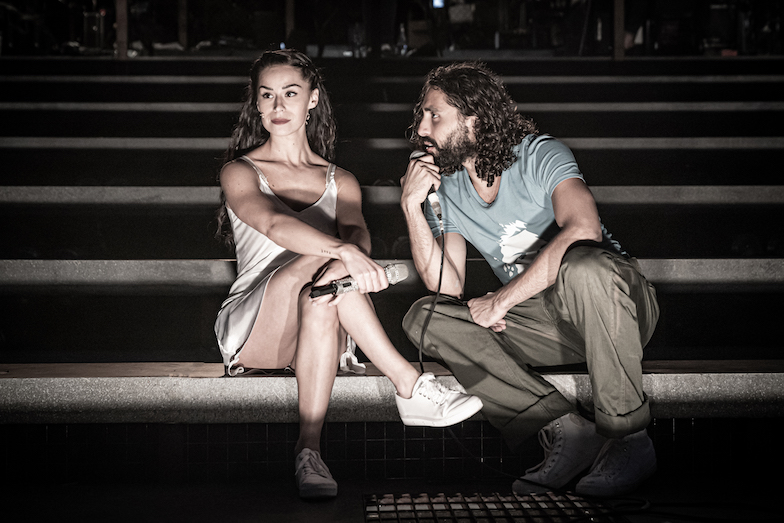 This pared-down reworking of the story of Argentina’s iconic, controversial first lady is a far cry from the polished, glossy look of past productions and the 1996 film. Proceedings unfold entirely on a sparse, simple set, comprised of a series of steps which is almost a mirror image of the tiered seating which the audience is sat on. While the simplicity is required for the complexity of the choreography on display, it does look a little empty compared to some of the more lavish sets we’ve seen in the Open Air Theatre.

Fear not, though, as the production is really brought to life with some outstanding dancing, coupled with wonderful singing, proficient musicianship and quite possibly the most pyrotechnics we’ve ever seen grace this stage. Not one for subtlety, the show starts with a literal bang as multiple confetti canons are fired across the stage and audience, and the pyrotechnics never really relent, with flares and fire galore. It’s a bit over the top and occasionally overwhelming, but all adds to the explosive atmosphere of this production.

The star of the show is, unsurprisingly, Samantha Pauly in the title role. She encapsulates Evita’s drive and determination perfectly, while delivering huge numbers like Buenos Aires and Don’t Cry For Me Argentina effortlessly. Ektor Rivera portrays an unusually youthful Juan Peron, Trent Saunders delivers an angry, cynical Che and Frances Mayli McCann absolutely nails Another Suitcase, Another Hall as the mistress. Not all of the supporting cast are as strong as the leads, although the ensemble dancers are really rather enjoyable to watch.

Now feels like the perfect opportunity to revive this show. Featuring a political rally full of populist rhetoric and chanting crowds, and portraying an unashamedly nepotistic regime – one where the media and political opponents are silenced – this is a smart, timely revival of Evita, which reflects the political sphere we currently inhabit.

One of the truly magical aspects of the Open Air Theatre is the elemental effects afforded by being in the space. Not only is the play timed to coincide with the most perfect moment of sunset, but also, during press night’s final, sombre scenes, the heavens opened and it really made the moment feel very special indeed. We thoroughly enjoyed our evening with Evita; it went a little overboard with the effects and not all of the acting was as strong as we’d have liked, but there’s still a lot here to enjoy.