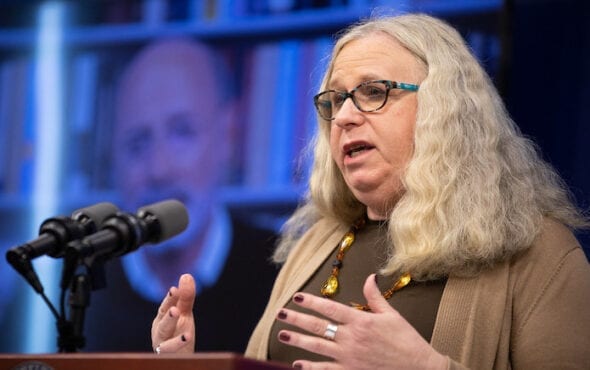 Dr. Levine has been confirmed to be assistant secretary of health at the Department of Health and Human Services (HHS) in a 52-48 vote.

All Democratic senators voted in favour of Dr. Levine as well as Republican senators Susan Collins and Lisa Murkowski.

Dr Levine’s history and understanding of healthcare will be key to her new government role and was a vital aspect of her favorability for the HHS position.

A previous top state health official, specifically as Pennsylvania’s physician general from 2015 to 2017 and, later, as secretary of health from 2018 to 2021, Dr. Levine spent much of her confirmation addressing questions relating to COVID-19 strategy for the Biden Administration.

They credited Dr Levine’s commitment to running and endurance against homophobic and transphobic language.

“Through all the transphobic attacks and bigotry that Dr. Levine endured during her confirmation process, she persevered, and the work and her determination paid off. We want to extend our enthusiastic congratulations to Dr. Levine on this amazing achievement and we thank President Biden for his decision to appoint Dr. Levine to this important post.

“As we continue to battle the ongoing COVID-19 pandemic, we could not think of a better, more capable person to help lead the Department of Health and Human Services.”

Dr. Levine’s confirmation marks the administration’s commitment to supporting LGBTQ+ health and education as well as help tackle the pandemic.

“Dr. Rachel Levine is a remarkable public servant with the knowledge and experience to help us contain this pandemic, and protect and improve the health and well-being of the American people,” Vice President-elect Kamala Harris said in a statement.

“President-elect Biden and I look forward to working with her to meet the unprecedented challenges facing Americans and rebuild our country in a way that lifts everyone up.”

Dr. Levine is also expected to build on some policies promised by the Trump administration, specifically around access to healthcare which disproportionately impacts lower-income backgrounds and people of colour.

“A lot of what the previous administration said about what was needed to really end the HIV epidemic was accurate, quite accurate,” senior director of policy of Whitman-Walker Health, Dan Bruner, told SELF.

Dr. Levine’s drive to lead inclusive healthcare campaigns was demonstrated in Pennsylvania where the former paediatrician drove efforts to include the LGBTQ+ community in health commitments and prioritised those living with HIV in the vaccine distribution plan as well as building a strong response to the ongoing opioid crisis.

“Transgender Americans will be able to see themselves in a position of profound leadership,” Uritus said.

“Dr. Levine’s confirmation is significant on many levels. In recent years, HHS has served as a tool to target LGBTQ – especially transgender – healthcare rights. Dr. Levine will be able to bring new skill sets and empathy into this position to help protect LGBTQ healthcare rights.”

Under the Trump administration, HHS directly targeting LGBTQ+ healthcare protections to enable further discrimination or lack of protections for the community.

Funding for HIV and AIDS research programmes were cut, bills were introduced which allowing doctors to refuse transgender patients, the education department stripped LGBTQ+ students from Title IX protections, and attacks were made on healthcare data pertaining to the LGBTQ+ healthcare education as was removed from the HSS website.

Dr. Levine’s new role as assistant secretary of health at the Department of Health will expect her to oversee the Health and Human Services offices and programmes nationwide.

President Biden spoke highly of the newly confirmed official earlier this year.
Biden said Dr. Levine will help bring “the steady leadership and essential expertise we need to get people through this pandemic – no matter their zip code, race, religion, sexual orientation, gender identity or disability.”