Queer retelling of Constellations is an outstanding theatrical achievement – review 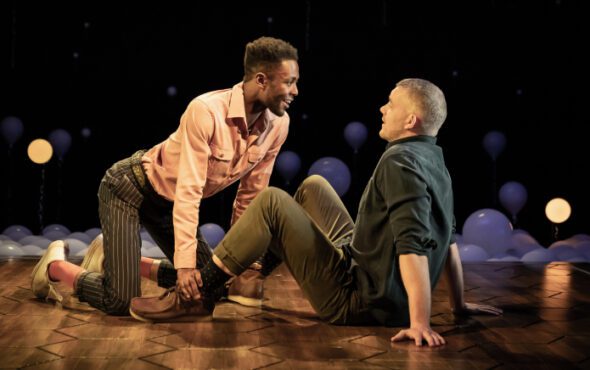 Russell Tovey and Omari Douglas star in this brilliant version of Nick Payne’s two-hander at the Vaudeville Theatre, directed by Michael Longhurst.

Constellations is an excellent play, but it’s one that takes a bit of explaining. It doesn’t simply tell the story of lovers Roland (Russell Tovey) and Emmanuel (Omari Douglas) – rather it considers their multiple possible stories. It’s a play that asks the “what if?” question a hundred times over – all of the scenes play out several times with slight alterations, each one throwing the pair on a different trajectory. Not content with presenting various possibilities in this couple’s multiverse, the show is playing over the summer with different pairs – we previously reviewed Constellations starring Peter Capaldi and Zoe Wanamaker – it’s an incredible concept and without doubt an outstanding theatrical achievement.

We were curious to see how the text might land differently – the version we saw earlier in the summer presented a heterosexual white couple, and we wondered whether the same words may resonate differently when performed by an interracial gay couple. To be honest – we were surprised by just how similar the two versions were. This is because Constellations is not specifically a play about a straight couple, or a gay couple, but rather about human connections and interactions, and how we behave and react in different situations.

We observed a couple of differences, including a fairly innocent-sounding line asking whether one of the men wanted to come inside raised a bigger laugh in this new context. Our biggest takeaway, however, was just how much more we identified with these characters – we warmed to them immediately and their story arc resonated more closely with our own experiences. Initial awkwardly-clipped conversations played out like a Grindr exchange; difficult dialogue exploring whether or not one of the guys should stay the night felt like our own experiences. 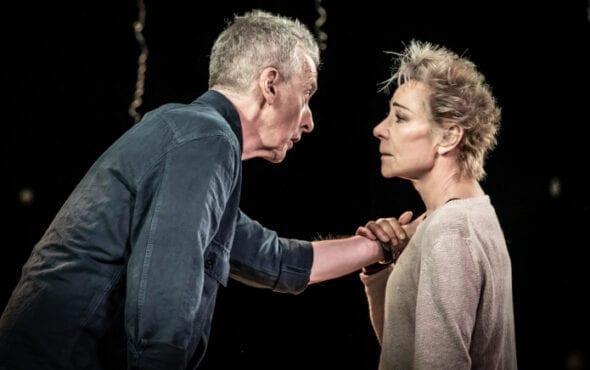 It’s a play which achieves a lot in a very short time frame – Constellations runs at 70 minutes without an interval, and packs more of an emotional punch than most other plays we’ve seen. It covers a whole host of difficult subjects, including some agonising life-changing decisions; one particular scene involving sign language is initially incredibly moving, but pivots towards an unexpectedly humorous punchline. It may be a cliche to say the show is an emotional rollercoaster, but you absolutely won’t regret going on this journey. We really cared about these characters, thanks to a brilliant script and stellar performances from both Russell and Omari.

It’s difficult to overstate just how much we enjoyed Constellations – it’s a smart play, and a slick production, and the acting throughout is superb. It strikes a brilliant balance between light and shade, and manages to simultaneously draw attention to the minute details (quips about living in Tower Hamlets or the availability of artisan honey in Crouch End raise a titter) without losing sight of the universal truths and experiences at its core. We’re also just so happy to see the normalisation of queer stories on the stage – both these characters are incidentally gay, their sexuality doesn’t define them. An outstanding piece of theatre and undoubtedly one of the best in town right now.