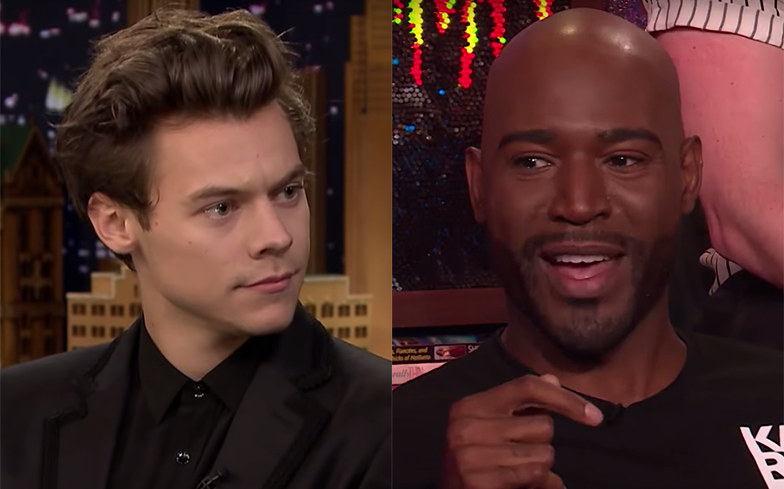 “He had never seen Grindr before, it was his first time.”

Karamo Brown says Harry Styles was “taught” how to use Grindr when the Queer Eye cast bumped into him in Japan.

The show’s culture expert appeared alongside the other members of the Fab Five – Bobby Brown, Tan France, Antoni Porowski and Jonathan Van Ness – on Watch What Happens Live with Andy Cohen on Wednesday (31 July).

When asked by a fan about their newfound friendship with the former One Direction star, Bobby responded: “Harry was absolutely lovely, super sweet guy, super chill, who else could you ask for as a better karaoke partner?”

Karamo then added: “I can tell you this, one of the people that was with Bobby and I there, taught Harry, showed him Grindr. He had never seen Grindr before, it was his first time.

“It was kind of cute that this straight guy was like, ‘There’s an app where you can just find a date?’ I thought it was really cute.”

Watch Karamo reveal all about Harry’s tryst with Grindr below.

Earlier this year, Netflix announced that the Fab Five will take their message of inclusivity and self-love to Tokyo.

The mini-series of Queer Eye will air for four episodes and will see the group intertwine with the country’s culture, while they transform the lives of four Japanese men and women from different cultures and backgrounds.

“In just a year since we launched season one, Queer Eye has become a global phenomenon once again and the Fab Five are truly the ambassadors of self-care and compassion that the world needs now more than ever,” said creator David Collins.

It returned for a third instalment last month to similar praise. The upcoming Japan special will air later this year. It hasn’t been confirmed whether Harry’s karaoke scene happened on or off camera.

All three seasons of Queer Eye are available to stream worldwide on Netflix.