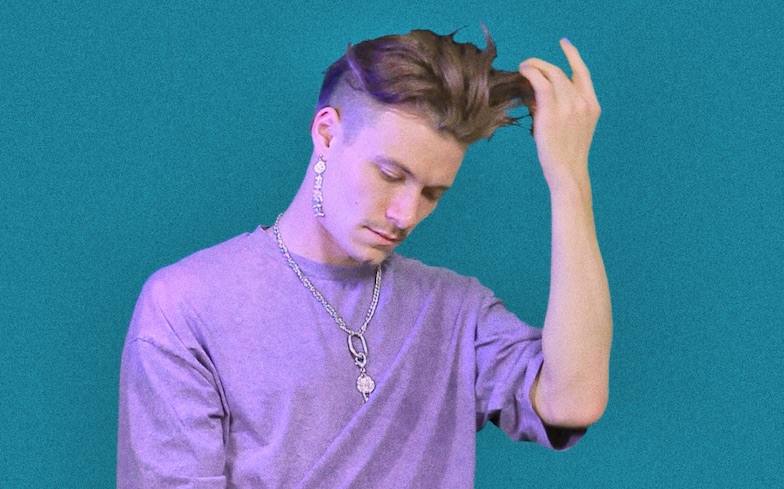 Directed by fellow queer artists SNG and Glass Battles, the aesthetic of the Stealing Candy visual pays homage to 90s Nickelodeon due to the star’s resemblance to – in his words – “a grown-up Chucky Finster from Rugrats.”

Speaking to Gay Times, the singer-songwriter and multi-instrumentalist admits he felt “growing anxieties and dysmorphia” around his face during the artistic process for the video, which ultimately influenced the final outcome.

“They [SNG and Glass Battles] were literally just like, ‘Well then, let’s cover it up!'” he reveals.

“The final product of those shots — the cloud of static following my face on a crowded street during the most forlorn lyrics, while everyone around me was walking in reverse — made for a really compelling visual to go with this kind of song.”

Zee Machine jokes that “galavanting across Hollywood Blvd with a green screen mask is easily the most terrifying thing” he’s ever done throughout his career so far, but it paid off because he was “infused with energy” he didn’t know he had.

The pop anthem will be included on the star’s sophomore EP, which was originally due for release later this year.

Although the coronavirus lockdown has halted the timeline of its release, Zee Machine says it’s beneficial for his music because “all this extra time has lit a fire under my ass to take what I was doing and push it further.”

He adds: “As a result, songs I’ve got in the works this year are by far the weirdest, coolest, and – oddly enough – the most joyful things I’ve ever written.”