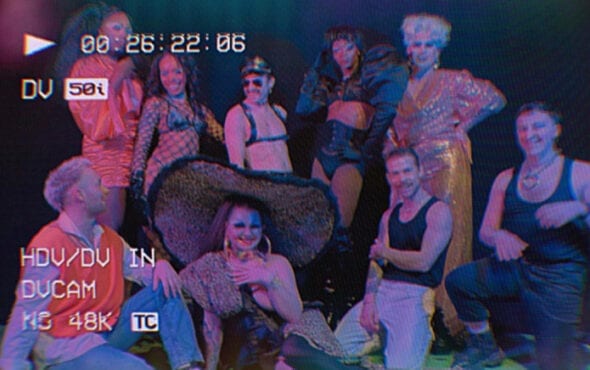 Directed by Ryan Charles, the visual is a disco extravaganza with five Birmingham-based drag entertainers lip-syncing the house down to a selection of Tom’s most beloved tracks.

Traces is performed by Lacey Lou, a drag queen inspired by “all the beautiful facets of Mother Nature,” from her aesthetic to her drag character and persona. She says: “Lacey Lou is also all about femme power and fighting for equality!”

Jenna Davinci, Birmingham’s reigning queen of “camp vamp”, lip-syncs to W.M, her favourite track from Black Country Disco. “My full time job is in Wolverhampton so naturally my favourite song off the album is W.M – a certified bop!” she explains.

Because she resonates with the “theme of heartbreak and misery,” Yshee Black performs Tender. The queen, who aims to celebrate Black culture within her art, praises the track’s “soft beat” and Tom’s “smooth vocals”.

Decked out in latex and leather, Tom climbs out from behind the camera to dance to the title track with the sickening Black Peppa, who describes her drag as “a sophisticated twist of fetish meets glamour with influences of Futurism.”

The whole video is a glorious celebration of Birmingham, disco and queerness. If you love pop music and being gay as hell, this is one for you.

Speaking with GAY TIMES, Tom says he wanted to conclude the era with a music video for his Country Club Martini Crew Megamix, which appears on his Black Country Discothèque remix album.

“I get to showcase the immense talent working the (currently dormant) Birmingham queer nightlife scene, which is a big part of the concept for the album,” he says.

“It was perfect, each queen gets their moment to shine and I even cameo in the video. We went one step further by having me dressed as a leather daddy, really inhabiting my inner-George Michael.

“The queens knocked it out the park, their individual energies and talents really shone through. I was actually a little bit starstruck on the day of the shoot!”

Charles had nothing but praise for all five drag entertainers, as well as Tom, saying it’s “always a pleasure working with the queens from Birmingham” because “it’s full of creativity, we have fun and there’s never a dull moment.”

“It’s part of what I love about directing and making videos – the process,” he says.

“I guess what I’m trying to convey is my love for my favourite thing about Birmingham; the creative talent, especially the drag queens, and getting to work some of those queens with Tom as part of that talent.”

The music video for B.C.D Megamix – Country Club Martini Crew Megamix is now streaming on YouTube. You can watch the clip here or below.

Although Tom says the Black Country Disco era has come to an end for “audio and visual” content, he plans to release a book with Polari Press, a publishing house specialising in queer art.

“It’s gonna be a coffee table book all about the process behind the album, the concepts, the images, the song meanings etc. It’s a lot of work, but I think it’ll be a really lovely thing to have,” he states.

The book is due for release this summer, and will hopefully coincide with his upcoming The Revenge Body Tour, which sold out in London and Manchester within 15 minutes. For details on how to purchase tickets, visit here.

“There are still tickets left for Birmingham – it’s 1000 capacity so I doubt that’ll sell out, but I’m gonna try! I’m hopefully adding another London date as well as Cardiff and Glasgow and then, two years after it started, I can finally lay BCD to rest!” he continues.

Not only that, Tom is working on his second studio album. While he doesn’t want to give anything away, he teases: “It’ll be coming round a lot sooner than people think!”