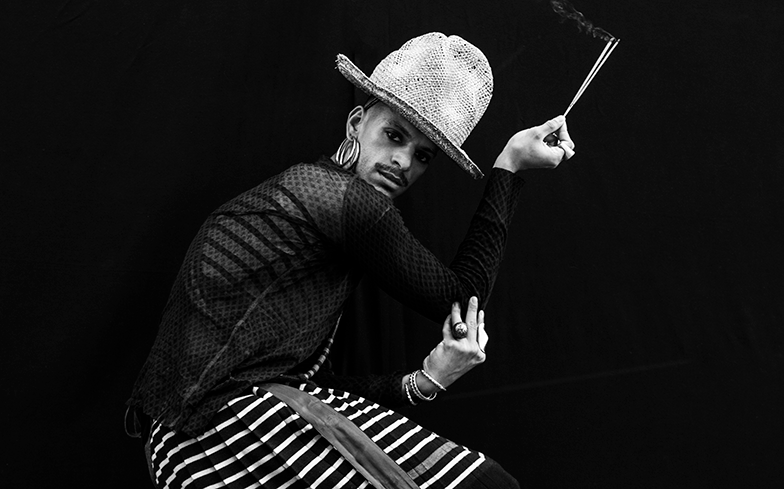 “It’s given them a light, it’s allowed them to speak up.”

“If you’re a queer person of colour, if you’re a voguer, if you’re in the ballroom scene, you want to be part of this story,” Jason A. Rodriguez says of FX’s groundbreaking LGBTQ drama Pose.

The series – helmed by Ryan Murphy, Brad Falchuk and Stephen Canals – focuses on the queer African-American and Latino communities of the ballroom scene in 1980s New York City, and features the largest amount of trans actors in regular roles of any scripted television series in history.

Jason continues: “It’s given them a light, it’s allowed them to speak up, speak their story, or even be inspired to create new stories.” Since its debut last year, Jason has portrayed Elektra Wintour’s sickening right-hand voguer Lemar, a role in which he aims to propel the art-form back into the mainstream.

“To have this opportunity to do this on Pose is incredible, to be a Latino queer person of colour, and have others in my realm who can relate to my identity, who can now see themselves on TV and hopefully feel empowered to succeed as well.”

Here, we talk with the performer about his role on Pose, the impact the series has on queer people of colour, and what he wants to see explored on its upcoming third season.

How has your life changed since you stepped into the role of Lemar?
My life has drastically changed, by giving me a higher platform to share my art. My vogue is now seen by members of the commercial world and dance concert world, which I’ve trained and given so much time to as I crafted my dance techniques. It’s allowed me to bring vogue to the mainstream again. I’m inspiring voguers to think of the possibility of making this dance form into a career, and young people of colour who haven’t vogued to begin with.

And you were a professional dancer and voguer before the show, so this must have been a dream role for you?
Absolutely. Any role that allows me to vogue is a dream role! I guess for me, because I first started with the House of Ninja and they trained me how to be a voguer. Now I’m a member of the House of Xtravaganza and I finally feel at home, which I haven’t felt in a while. Being a voguer is improvising and being expressive on the spot using these Pose-like poses, hand-framing gestures and trying to articulate pretty much an idea or expression that you can’t say, but you can through dance. To have this opportunity to do this on Pose is incredible, to be a Latino queer person of colour, and have others in my realm who can relate to my identity, who can now see themselves on TV and hopefully feel empowered to succeed as well.

What kind of impact do you think this show has had on queer people of colour?
I feel like it pretty much empowers them. It’s given them a light, it’s allowed them to speak up, speak their story, or even be inspired to create new stories. I feel like if you’re a queer person of colour, if you’re a voguer, if you’re in the ballroom scene, you want to be part of this story. My hope, and I think this is happening, is that Pose is inspiring people to write their own stories. I mean, Steven Canals wrote the story years ago. With patience and time – and being in the correct room – it was able to evolve into what we see now today. So I think it’s just really empowering our culture to be active, and really thinking about protecting and finding justice for our people of colour, our trans women and men of colour. It’s allowed us to speak up.

And do you think Pose proves that getting trans actors to play trans roles is the right thing to do?
Absolutely. I mean, who better to try and imbue a trans person’s or trans identity’s story than a trans person? It’s not brand new to them, but it’s brand new to us. So, as you’re allowing someone in this moment this platform and creating these characters, I think the respect and authenticity of allowing those people of those identities to play their roles is very important. It hasn’t been up until now where we’re interested and we’re allowing trans people to be seen more and more. We still have a selective number on the screen. So I think the more justice you do the role the better, so keep trans people playing trans people.

Do you think Pose will be a template for blockbusters to do the same thing and get trans people on the big screen?
I think so. It’s already pushing the trans people you see on this show to be part of other shows, such as Angelica Ross on American Horror Story and Dominique Jackson on American Gods. Our trans individuals working in this industry are not only sending messages to the industry, but also to the trans individuals watching at home that you can do this. You can survive and you can succeed.

What would you like to see explored on the upcoming third season?
I just saw this documentary called Pier Kids and it’s sort of like within 2016, as someone’s college project. And it’s pretty much interviewing people who lived on the pier off of Christopher Street in New York City. It really hit home for me so much in the sense of, ‘Am I doing enough? How did I not know about this?’ I never watched this film to enlighten me on how people of colour, trans people of colour, queer people of colour, how they really survive. Part of being in this fabulous realm of Pose, I think the fabulous and the fashion of it does stem from a dark place to survive. So I would really like to see more of trans women and gay men and female people of colour and their struggles in New York City, so really reflecting on these characters who hadn’t had authority in this city, showing that a little more. Maybe showing more nightlife and queer culture of New York City and what that looks like when ballroom people step into that space and how they get affected by it, so maybe just these other points of queer culture.

How important is it to have an openly queer person, like Ryan Murphy, having such a prominent space in the media?
Very important. My first time meeting him was the first day we filmed for season one, and I was already watching American Horror Story. I saw him as a name, and as an energy and as an entity. And then to meet him, and get to know him, and for him to be so kind and sweet, it feels amazing. It feels perfected. I can’t say he’s only shared his platform with one individual, because we’re stemming off of the queer people of colour community with these characters, so he’s really allowed a community to be seen. And I feel like now we’re really holding a spot, and we’re staying strong as much as our community is seeing it. So as our community is seeing it, they’re keeping us supported, which keeps us creating more and more of these stories.

Where would you like to see Lamar go next?
Oh my god, that’s a good one! I mean, I’d like to see him in his element, what he looks like outside of his house, maybe chilling at the pier, maybe cruising on some guys. What does it look like for a Latino boy to be in New York City, and obviously within the timeframe of the 90s? But what does his day to day look like? We always see him in power, and on the ballroom floor and runway. But what makes him so strong? Going back to our artistic expression is strong because of the darkest places we’ve been at the time. So maybe to see a dark time for Lamar to show why he’s so prominent and so strong on the runway.

And what can we expect from Jason A. Rodriguez next?
From me next? Right now I’m pretty much working with this new stage in our houses within ballroom culture. We have performance houses, so I have a performance house called the House of Eon, and we try to pick individuals from the ballroom scene and bring them down for professional projects and gigs. I want to have a casting, called Eon, casting for voguers, and to open a dance studio in Washington Heights in my community. I learned about dance at 19 – and that’s late! Especially being from NYC which is a known Mecca for dance. I want to take all my knowledge, networks and friends as a source of knowledge of the arts and bring it to Washington Heights for all the potential artistic young queer kids of color and supportive young kids to succeed in dance! To present them an opportunity to express and to find themselves. Oh, and be a dad someday. I mean I’m already a dad now because I have some chosen kids who are my apprentices: Maleek. Jose, Ashlynn and Rob. Most of them I found in my dance class and had this tug on my heart to want to be part of their lives as a guide and a role model. In mentoring and caring for them, I definitely see myself as a dad embracing two kids with love.

The first two seasons of Pose are now available to stream on BBC iPlayer.