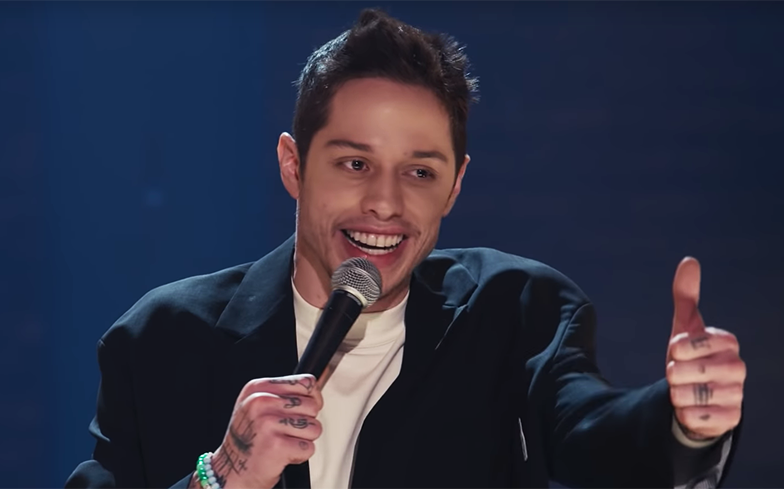 “I’m all for the gayness, you know. It doesn’t mean I’m against gayness.”

Pete Davidson has been criticised for making “outdated” jokes about gay men in the trailer for his Netflix special.

The one-minute teaser for Pete Davidson: Alive From New York focuses entirely on the Saturday Night Live alum’s friendships with gay men and how their interactions with women differ from straight men.

“I like my gay friends because I don’t think there’s like a more honest relationship between a gay dude and a straight dude,” he begins. “Because there’s just like nothing to gain, you know, so it’s just pure honesty.”

Pete continued to say that “there’s always one gay friend that I don’t think is fucking gay at all” and that everyone knows a “gay dude that’ll run up on your girlfriend and squeeze her boobs, and slap her ass and be like, ‘Damn girl, you look great!'”

“I don’t find that fucking funny at all, I’m sorry,” he continued. “I’m all for the gayness, you know. It doesn’t mean I’m against gayness. It’s just like you get to slap ass on a technicality? That’s not fucking fair at all.”

Pete said he wouldn’t “walk up to his boyfriend and tug his dick” just because he could.

The comedian’s comments were criticised on social media by the queer community, with one saying his special is “just a bunch of hack-y jokes about guys we’ve all heard a thousands times like 20 years ago”.

One wrote: “Pete Davidson’s jokes about gay men are so strange because they’re like a straight man’s idea of what he might do if he could touch women however he wanted and they’d take it as a joke.”

Another tweeted: “Straight women defending that Pete Davidson promo video… He’s literally saying gay men get to sexually harass women “on a technicality”, as in, he wants to have an excuse do it too.

“He’s misogynistic AND homophobic, how is that hard to understand.”

However, there were a select few who defended Pete for “tackling the complexity of gay friendships” but agreed that he isn’t the right person to have this conversation.

Watch the trailer for Pete Davidson: Alive From New York below.