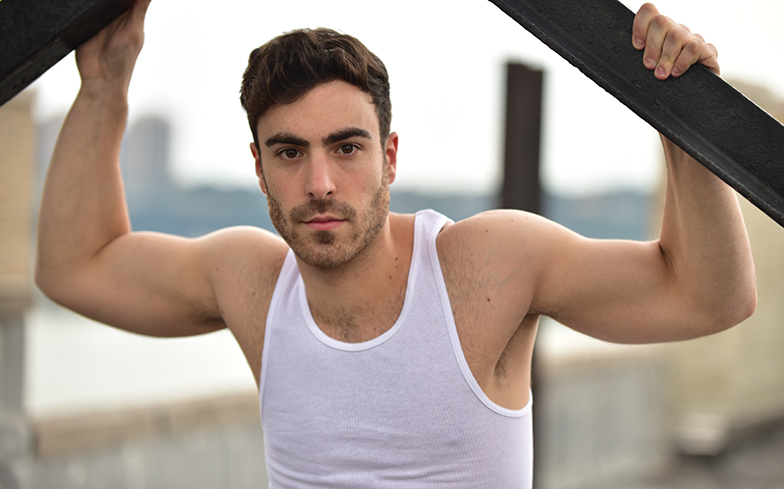 While we’re seeing more and more queer representation in pop music from the likes of Troye Sivan, Hayley Kiyoko and Sam Smith, one area of the LGBTQ community that remains sorely underrepresented is pansexuality. Mike Taveira wants to change that. With his new single Curious, he’s delivered a pansexual pop anthem which celebrates queer identity and the beauty of connection between people of all genders and identities.

The sensual music video, meanwhile, sees Mike flirt with a number of potential love interests including trans model Arisce Wanzer, Shameless star George Todd McLachlan, and former RuPaul’s Drag Race stars Monét X Change and Sonique. To celebrate the new track, we spoke to Mike about the need for pansexual representation in entertainment and how he chose his famous guest stars.

Where did the inspiration for Curious come from?
Curious is about the first steps I took towards honouring my queerness.  I was attracted to someone who I knew was also attracted to me, but social constructs prevented us from acting on it until we found ourselves alone. The song reflects the moment where we could be vulnerable with each other and explore this part of ourselves.

There aren’t many songs about pansexuality. Why is it so important to have this representation?
I never had a male figure growing up that would vocally express “I am into women and men” “I am into trans women and trans men.” Those words out loud never existed and still are very rare for a man to express. I grew up without any openly pansexual figures to look up to, I knew that my personal journey needed to be expressed through my music. I want my story to connect with others who have also felt confused about where they fit in.

In the past we’ve had songs like Katy Perry’s I Kissed A Girl and Rita Ora’s Girls face controversy for trivialising or fetishising the idea of being attracted to more than one gender, especially when (in Katy’s case) it comes from a straight-identifying artist. Do you see this as a problem? Or should anyone be able to celebrate this?
There’s a fine line when you are defining sexual curiosity verses fetishising. It does upset me to see artists sing about having to be drunk or when they have thoughts sexually about a different gender they make it seem as if they have done something bad or taboo and that they shouldn’t be doing it when in reality it’s just having a beautiful connection with a person that isn’t from a heteronormative narrative. I understand that societal pressures make people feel this way but if you are going to release music to celebrate it then try and normalise it to the ignorant and not have actual queer people listen and feel like there is something wrong with who they are.

There are a few familiar queer faces in the Curious music video, like Sonique and Monét. What drew you to them?
I’m very grateful to have friends and people within the community that are passionate about seeing queer artists tell their stories, so when I had inspiration for a scene or character I looked for someone who could accurately reflect the world we live in. Collaboration between queer artists is beautiful and important and it’s very humbling to be lifted up and supported by the community that I love so much.

Often being LGBTQ is seen as a hardship, but it can be an incredible thing too, as your video shows. What are some of your favourite things about being queer?
Being queer is something I’m so proud of and because I’m being true to myself, I now get to live in the moment while sharing unimaginable connections within the community. Being in touch with my queerness is what ultimately brought me to my music and carving out my artistry that I get to share with the world. I hope that I can keep pushing my art into the mainstream while staying true to my queer roots.

Watch the video for Curious here or below.

Curious is available to stream on Apple Music now.