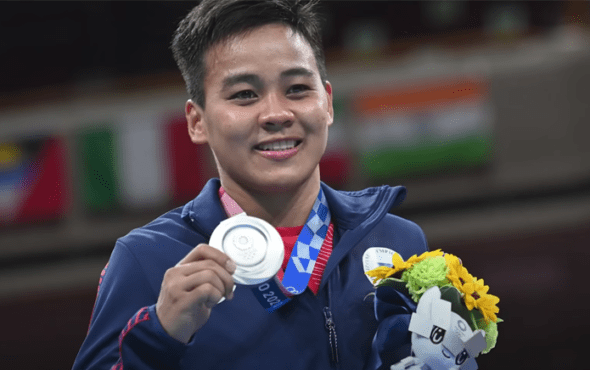 The Filipino featherweight has won the first boxing Olympic medal for her country after closing a match against Japan.

Nesthy Petecio has made history winning a silver medal in women’s boxing after defeating Japan’s Sena Irie in an incredible match.

Petecio dedicated her win to her country, the LGBTQ+ community, and her training coaches following the fight.

Women’s Boxing has been included as part of the Olympics since 2012, however, the 2020 Tokyo Games marks the first time the sport has included a featherweight division.

“I’m very proud and blessed,” Petecio told the virtual Philippine Sportswriters Association (PSA) Forum Tuesday afternoon, according to ESPN. “It was not easy getting to this stage, let alone winning an Olympic medal.”

In a tearful moment, Petecio dedicated her win to her friends, family, and community: “Aside from my family and my late best friend, I wanted to dedicate a gold medal to my coaches, too,” she said.

“But silver isn’t bad. I’m still proud I was able to give this medal to my coaches. I feel very happy and blessed to see my coaches smiling after all the hardships we’ve been through.”

The athlete also made time to acknowledge the queer community: “This win is for the LGBTQ community. Let’s go, fight!”.

It's silver for #PHI!

Nesthy Petecio gives the nation their second Olympic medal of #Tokyo2020 after a thrilling victory in the women's #Boxing featherweight category!@olympicphi pic.twitter.com/VUizJPw5Nz

Reflecting on her win, 29-year-old Petecio told ESPN that she salutes her Japanese competitor, Sena, for her strong performance.

“I salute Sena. She really wanted to win. We both did, really. This whole experience is incomparable because I won a medal in my very first Olympics,” she told ESPN.

“This is easily the most unforgettable moment of my life. I was only expecting a bronze, but I got a silver. The Lord is amazing.”

Petecio is one of many out LGBTQ+ athletes participating in the Tokyo Olympics. The athlete has also broken barriers becoming the first Filipino boxer to win a medal in almost 25 years, according to Outsports.

The Filipino boxer has now set her sights on the 2024 Olympics which are set to take place in Paris.

“I think I can do it. Hidilyn (Diaz) won a silver in Rio back in 2016 and won gold this year; why not try, right? Maybe I can even get the gold this time,” she told ESPN. “I hope we can get that. I’ll work hard for that.”

Petecio and her teammate Irish Magno, who is also an out LGBTQ+ athlete, were the first Filipino women to compete in boxing at the Olympics.

Magno was the first Filipino woman to qualify for the Games, according to Quartz.