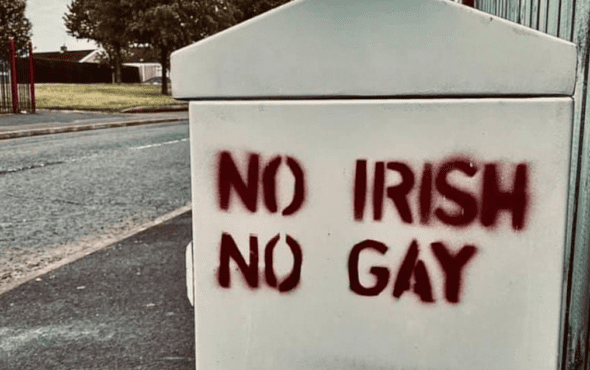 An electric box in Lurgan was found vandalised with hateful homophobic and racist comments.

Appearing on Pollock Drive, in the Mourneview area of Lurgan, County Armagh, the cruel phrases were stencilled on an electric box in red, according to Armaghi.

SDLP Councillor Ciaran Toman addressed the act and stated the views conveyed in the graffiti did not reflect the views of the local people.

“It is reprehensible in this day and age that someone would go out of their way and erect such a sign… This racist and homophobic action is a direct consequence of the failure of political leadership,” Toman said.

“These views are not representative of the majority people of Lurgan nor of the people in Northern Ireland and they will not be tolerated.”

Councillor Toman added: “Spray-can warriors will not hold back the progression of LGBT+ rights here in the North.”

This racist & homophobic action is a direct consequence of the failure of political leaders.

These views are not representative of the majority people of Lurgan nor in NI & they will not be tolerated.

Spray-can warriors will not hold back the progression of LGBT+ rights pic.twitter.com/OXCGFq3is7

“Those spray painting these homophobic statements do not represent the vast majority of people here, and I condemn them and their actions entirely,” Lavery said. “All of us must unite and face down homophobia and those who promote it.”

Last month homophbic graffiti was found on an abandoned house in full view of those attending Lurgan Hospital as reported by Armaghi. The vandalism read ““f**k your gay Pride”.