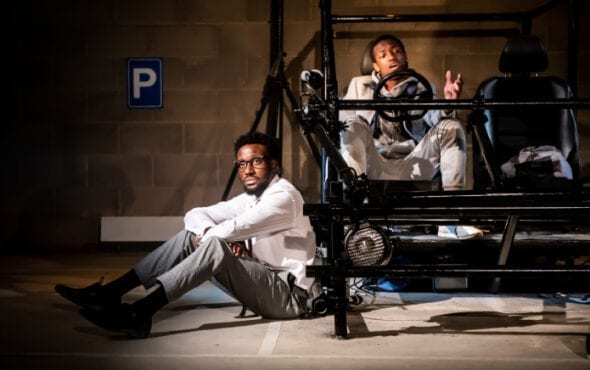 Charles Entsie’s two-hander, the recipient of the Adrian Pagan Award for New Writing, is the King’s Head Theatre’s first production since the pandemic hit.

Not that anyone’s counting, but since the pandemic first hit last year, the King’s Head Theatre did not stage a live performance for 436 days. No Strings Attached brings an end to that bleak tally, although it’s not actually being performed in the main theatre itself – a new pop up space called the Ignition Room, in a disused retail unit in Islington Square, is the venue for the performance. Audience members should note in advance that it’s a bare basics space, with no bar or toilet facilities – but we are of course able to use those at the King’s Head pub which is but a one-minute stroll along Upper Street.

The Ignition Room has been configured to look like a car park, with a simple set comprising a car constructed from scaffolding. The majority of the action unfolds inside the car. At the start of the play we are introduced to two guys, referred to simply as Man (Razak Osman) and Boy (Shak Benjamin), who are hurriedly putting their clothes back on after a hook up. The next hour details their subsequent conversation; initially guarded, they begin to relax and show more of their true selves as the conversation unfolds.

No Strings Attached gets a lot of things right. The script touches on topics which hit home – feelings of inadequacy, of social isolation, of not belonging – these are feelings that most gay men, and indeed most people in the LGBTQ+ community, have had to cope with during their lived experiences. The play considers them sensitively and from a range of perspectives; Boy and Man are clearly at very different life stages and their personal circumstances have little in common, yet they’re both dealing with the same types of issues. The acting is very strong too. There’s a believability to their on-stage chemistry and both actors deliver powerful, authentic performances – it all feels so effortless. Aileen Gonsalves’ direction is excellent – she has created a real sense of space and atmosphere which extends far beyond the car park created in the Ignition Room. She’s also not afraid to utilise silence on a regular basis – the awkward moments between the characters really work well as a result.

We thoroughly enjoyed our hour with No Strings Attached. A deceptively simple show, it touches on topics which really got us thinking long after we’d left the theatre. It’s a powerful and thought-provoking debut from Charles Entsie, and well worth checking out.