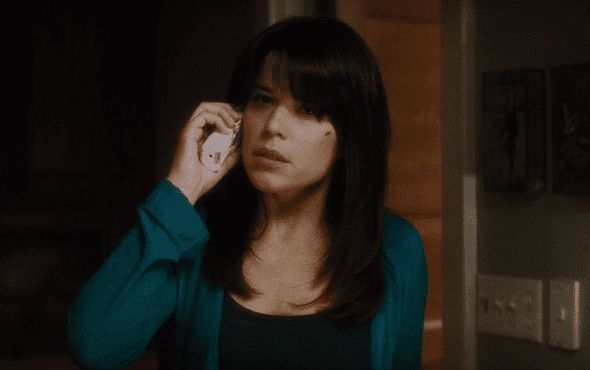 The original trio are all on board for Scream 5.

Earlier this week, it was announced that Neve Campbell is returning to the acclaimed horror franchise as her signature character, Sidney Prescott.

The highly-anticipated fourth sequel is being directed by Matt Bettinelli-Olpin and Tyler Gillett, of the filmmaking group Radio Silence (Ready or Not), from a screenplay by James Vanderbilt (Murder Mystery) and Guy Busick (Castle Rock).

In a statement, Neve confirmed that the film will return to the fictional setting of the original Scream movies, Woodsboro, California.

“After spending time speaking with Radio Silence, they have shown such love, respect and admiration for Wes Craven and all that he’s created in the Scream franchise,” she said. “I am beyond excited to step back into the role of Sidney Prescott and return to Woodsboro.”

Courtney Cox and David Arquette are also reprising their roles as Gale Weathers and Dewey Riley, while Jack Quaid (The Boys), Melissa Barrera (In The Heights) and Jenna Ortega (You) have joined the cast.

Kevin Williamson, who wrote the first, second and fourth films in the franchise, will executive produce alongside Vanderbilt (for Project X Entertainment) and Radio Silence’s Chad Villella. Paul Neinstein and William Sherak are producing.

“We’re pinching ourselves!” said Radio Silence. “It’s hard to express how much the character Sidney Prescott shaped our love of movies and to have the chance to work with Neve is truly a dream come true. It just wouldn’t be a Scream movie without Neve and we’re so excited and honored to join her in Woodsboro.”

The first Scream was released in 1996 to universal acclaim and is credited with revitalising the horror genre. A sequel was released to similar praise one year later, while the 2000 threequel received mixed to negative reviews.