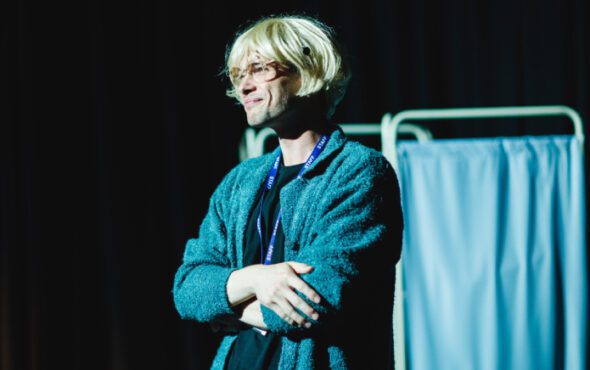 We had the most amazing chat with It’s A Sin star Nathaniel Hall a few months ago as he was preparing to tour his play First Time, which caught the attention of Russell T Davies during a previous run and led to Nathaniel being cast in the seminal TV hit of last year. He has revived his play and has been touring it these last few months – we caught it this week at London’s Pleasance Theatre. The tour will continue over the coming weeks with performances in Bath, Birmingham, Nottingham, Dorchester, Plymouth, Keswick and Bristol.

Russell T Davies has described the show as “a remarkable story of triumph” and frankly we couldn’t agree more – this is a captivating show, shining a spotlight on the highs and lows of gay life, and really is an essential piece of queer theatre. The opening scene took a few minutes to warm up, but after an early highlight of a prom dance – starring Nathaniel as Head Boy and a wonderful volunteer audience member as Head Girl, and featuring some delightfully entertaining props – it was plain sailing. It has lots of light and shade, and while the subject matter does of course get heavy at times, it’s also full of heartwarming and laugh-out-loud moments.

For those unfamiliar with the show, First Time is an autobiographical piece, focusing on Nathaniel’s HIV+ diagnosis as a teenage college student and following his life from that moment onwards. Key to the success of this production is Nathaniel’s skill as a performer and his relatability as a queer person – there are so many “I remember that” or “that could have been me” moments that it’s going to resonate with people across the LGBTQ+ community. He speaks eloquently on challenging issues including depression, shame, stigma and the processing of trauma – he covers these with a real sensitivity and care.

It’s also a play steeped in queer history – while the events all take place during the 2000s and 2010s it acknowledges the debt that we all owe to the generations that came before us. Whether heralding scientific breakthroughs – while contrasting this with the behind-the-scenes decision making about who should be able to access what drugs, when and what cost – or spotlighting segregation within communities, likening the suggestion that HIV+ people should declare their status before having sex to a pink triangle-style badge – it’s a smart show brimming with queer cultural references spanning several decades.

We think First Time is a remarkably powerful piece of theatre. It’s incredibly moving – the last 15 or so minutes had us in tears – but it’s full of humour, charm and a genuine, honest warmth, as Nathaniel is just such a likeable performer. The best shows are the ones that really provoke a reaction, and we left the theatre feeling inspired and empowered to do more, to be better allies to the HIV+ members of our community. If you’re able to make one of the remaining performances, go – you won’t regret it. Utterly essential.