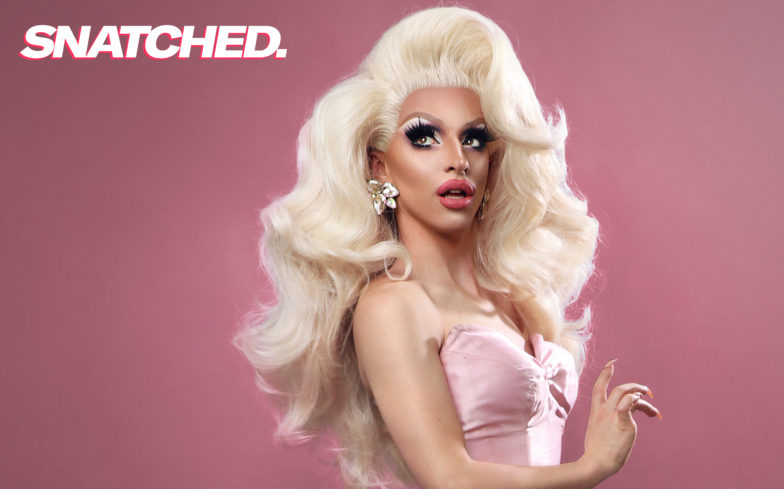 Miz Cracker on her one-woman show American Woman and the future of Drag Race.

“There are so many different kinds of feminism, maybe you’re afraid of it because you’re completely ignorant and think there’s only one kind and it hates you,” Miz Cracker tells us about non-identifying feminists during her drive through the Mojave desert (she’s currently on the Haters Roast Tour).

“I think that feminism is a bad word for people because they’re really so ignorant of what it means and how many meanings it has. You realise it was ten minutes ago that women were not able to say, ‘My husband forced me to have sex and that’s rape.’

“The kind of basic rights that everyone should have access to. How in that context can you say you don’t care about feminism and women’s rights?”

The NYC-based performer – who rose to fame as a contestant on the tenth season of RuPaul’s Drag Race – is about to tour the United States with American Woman, which will be an informative yet entertainting show in which she sheds some light on women’s rights around the world.

To commemorate the tour, (which will be hitting the United States this March – you can buy tickets here), we caught up with the fan-favourite queen to discuss American Woman, how gay men can become better allies to women, and whether we can expect a comeback on All Stars…

Hi Miz Cracker! Congratulations on American Woman. What message are you hoping to spread with the show?
First of all, obviously we’re in a time where women’s rights need to be talked about, by anybody who has a platform – right? But particularly for drag queens, when we look at an audience, we see 90% of faces are women. The message I’m trying to spread, if you look at your life and you see that you have a tremendous amount of support from women, maybe it’s time to give back. Now, gay people especially in America and the UK, we have a lot of privileges. It doesn’t mean that our lives are perfect, we still have a lot of struggles. We are at a point where we can give back for some of the incredible things that women have done for us individually, like taking us to high school dances. But also what women have done to support the queer liberation movement around the world. Look around you and see if you have it in you to lend a hand to the people that have lent you a hand for so long.

How do you think gay men can become better allies to women?
Well I think for drag queens in particular, we literally have a microphone and a platform to speak about things that are important. And another way on an individual level, there’s a lot of casual misogyny and jokes in the queer community, giving women a hard time in gay bars, seeing them as an accessory instead of a person. I think we can look at those casual kinds of misogyny that we accept and say, ‘Hey, maybe this was funny a while ago, but maybe not now.’

A lot of people don’t identify as a feminist because they associate the word with hating men, and they think it’s more aggressive than it is. Why do you think this is?
People think feminism is monolithic. I think there’s a lot of people in the queer community who would think of Christians as a monolithic group, as people we should avoid. But then if you think on a grandeur level and an individual level, there are so many different kinds of Christianity and so many individual Christians, that it’s better to think on an individual level. There are so many different kinds of feminism, so many different feminists, maybe you’re afraid of it because you’re completely ignorant and think there’s only one kind and it hates you. I think that feminism is a bad word for people because they’re really so ignorant of what it means and how many meanings it has. Recently, hearing about Ruth Bader Ginsburg, who’s really having a moment here in the US where we’re talking about what she’s done for women in America, you realise it was ten minutes ago, that women were not able to say, ‘My husband forced me to have sex and that’s rape.’ The kind of basic rights that everyone should have access to. Women very recently didn’t have access to most of them. How in that context can you say you don’t care about feminism and women’s rights?

There are also quite a few women who don’t identify as a feminist…
Yeah but I’m never gonna tell a woman how to feel about women. I’m never gonna tell her how to feel about feminism, but I would tell anyone male or female who is against something that is about advancing human rights, to just have a sad look in the mirror. I don’t want anyone to change their minds because I said so, I don’t wanna mansplain a woman into being a feminist, but I do wanna say, ‘Hey, if it’s pro-human rights, why not give it a whack?’ Another thing I wanna say on that note about the show, is that this is not me mansplaining women’s rights to women. As a cis man, I don’t have the place to tell women how to feel about women, to tell women how to feel about being women, but I do have a platform to, as a man, think about what I can do to be of help. That’s what the show is about, me saying ‘What can I do?’ Me in conversation with women, and the outcome of that conversation is these dance numbers that I hope will make people laugh, but at no point am I speaking for women or telling them what they should do, this is me reporting on what I can do.

Not only will the show be informative, but you’ll be providing entertainment, so what can we expect from these numbers?
Well as you know from my tours around the UK, I’m a super high energy dance performer. Doesn’t mean she’s a trained professional but it does mean she will do a cartwheel into wide legged splits. You can expect great female voices, Ariana Grande of today, Cher of forever, and in these numbers we’re going to laugh about tampons, about mens’ inability to hear women when they ask for basic respect, and we’re gonna mock the situation that we’re in, with video, multimedia, the most expensive costumes I’ve ever worn for a show, and just that Cracker energy. Which women in particular inspire you?
The two standouts for sure for me are, one of them is a semi-mythic character from American history. A young woman who is alleged to have done Paul Revere’s ride, but like 40 miles longer, and she is lost in history and it’s been questioned whether she really existed. I love the idea that this young lady who could have been pivotal, but because she’s a woman, there’s not even enough written about her for us to really know what she experienced. I’m so inspired by this person who may have done something so incredible even though it was done completely in the dark, she was never gonna have the spotlight like Paul Revere would have. On a personal level it is definitely my mother, because for so many gay men, what you understand about femininity and about women is growing up and watching your mother. It certainly was that way for me, and as I grew to really grasp feminism, part of that was just realising ‘Wow I owe so much to women, I was raised by my mother and my sister and my grandmother.’ My mother as a figure to me is a real representation of what I owe to women. Not everyone has that relationship, but when we think of gay archetypes we think of that mother figure, she is standing before us, being a woman, and I’m just wandering around in her heels trying it on.

There’s a stigma against women becoming drag queens. It feels like we won’t get that acceptance for ‘bio-queens’ until they are represented on TV like Drag Race, because obviously Drag Race has done a lot for the art-form. Do you think in the future we could see a ‘bio-queen’ on the show?
I’ve found that over the years, RuPaul’s Drag Race has grown to reflect what the drag community demands, and what exists in the community, so if we want to see a ‘bio-queen’ or a drag king on the show, the place for us to start is for us in the world to demand that they have a place. To demand that drag kings have a place in a drag bar, or for ‘bio-queens’ not to feel nervous because of gay misogyny to walk into a gay bar. The more we lift those people up I think the show will respond. If we ask RuPaul to support them, it’s hollow, because if we don’t support them ourselves I don’t think it’s gonna work.

Can we expect an appearance from you on a future season of All Stars?
Well what I usually say is that if they can afford to pay me per day what I get paid per day in the real world then…. [Laughs] Reality television is so testing, but I’ve been in that world for a year now and I really want to get back to reality reality, so I think I’d have to put it off for a while. Between American Woman and a few other projects that I’m watching like right now, there’s just not the space for it. Maybe, one day, in the future.

What else have you got planned over the next year?
I will be making good on my promise to use drag as a tool for activism, to bring it to places where homosexuality or trans life or drag life are not accepted, and appear as a woman in drag and make my voice heard. The biggest plan for right now is American Woman, and behind that we’re going to do a project that will bring my show, and me, for free, to a place that wants to see Cracker but can’t necessarily afford it, or wouldn’t usually have a Ru girl come out there. We’ll be releasing more details about that soon, but for now just know I’m going to be stepping outside of that idea of the Ru girl as a money-monster, to bring drag into the States and beyond for free.

If you didn’t catch it the first time, you can buy tickets for Miz Cracker’s highly-anticipated tour, American Woman, here.