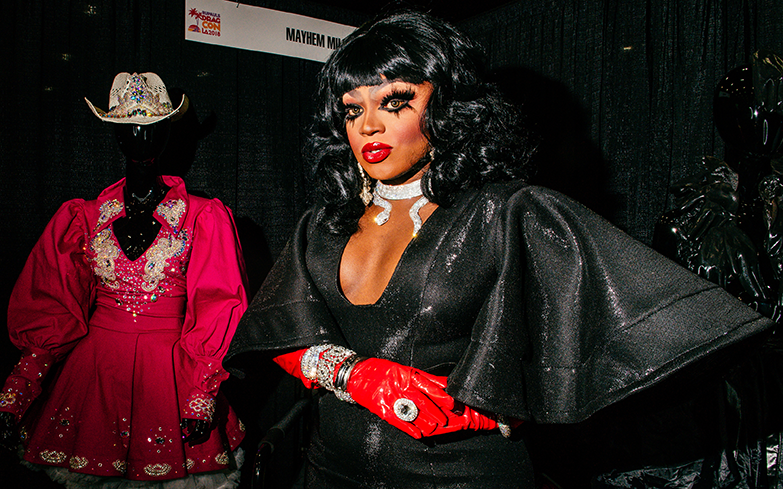 Mayhem spills all the T in this exclusive interview with Gay Times.

A prominent figure in the West Hollywood drag scene, Californian queen Mayhem Miller sashayed into the Drag Race werk room this season with a fierce and revered reputation. But honey, it took a while for her to get there. Despite a legendary repertoire – and queens such as Raven, Morgan McMichaels, Delta Work and Detox in her drag family – it took Mayhem nine attempts to land a place in the Olympics of drag.

Did she live up to her name? Urm, yas! Mayhem proved her charisma, uniqueness, nerve and talent in the first episode, triumphing over her competitors for the Drag on a Dime maxi-challenge, and showcased her incredible performance skills in one of this season’s most memorable lip-syncs. However, it’s Mayhem’s loveable, congenial nature we remember most.

But her kindness doesn’t mean she’s exempt from hate. Earlier this month, Mayhem spilt some mother-tucking T, and revealed that one of the queens left her a threatening message before her elimination. Here, Gay Times discusses with Mayhem that suspicious note, how she deals with hate on social media, and who she wants to see in the Drag Race Hall of Fame…

You auditioned for so many times for the show. Did you ever consider giving up?
Of course! After being told no for so long, you kind of just lose hope and say to yourself, ‘Y’know what? Maybe this just isn’t for me.’ But, people kept encouraging me to continue with it, and of course, I had to find it within myself to push myself and do it one more time. And, the last time worked!

What advice would you like to give those auditioning for Drag Race?
I would definitely say to be yourself, and be as genuinely yourself as possible. Remember that, you wanna be on the show because you wanna show the world who you are, not who you can be. A lot of people try to give what’s already been done, like no, we’ve already seen that person. You should be yourself, and it’s important for your story to be told.

You’ve got a huge drag family, consisting of queens such as Morgan McMichaels and Raven. What’s it like to have that bond?
It’s amazing to see my friends and their success, especially through RuPaul’s Drag Race. I’ve known them all before Drag Race, and there’s been some I’ve met through Drag Race. It’s pretty cool to see the journey that a lot of them have gone on, and the world has now recognised the talent I’ve always seen.

Out of your season 10 sisters, who did you have the closest bond with?
On the show, I felt connected with Eureka and The Vixen. After the show, I grew closer with Vanessa [Vanjie Mateo]. Speaking of Miss Vanjie, did you expect her exit to become so iconic?
Absolutely not. I knew that it would be a moment that would’ve been used, and I thought it was going to be a good laugh, because when it happened, you saw RuPaul laughing. But I had no clue that it would’ve developed the way it has.

I don’t think anyone had a clue. It’s still ongoing!
It’s crazy that the first person that goes home is so much popular than some of the girls that are still there!

Have you received a lot of hate on social media since appearing on the show? And if so, how do you deal with it?
I have received hate on social media, especially when the show was starting. I was getting a lot of comparisons to other queens, and had to address it. I had to tell them to give these queens their respective love. Don’t tear someone down because you’re a fan of someone else. It boggles me, I don’t understand why people do that. Other than that, I’ve had a couple death threats, and they’re always anonymous. They say they’re going to come to the club and shoot me, and someone said they were gonna come up to me and throw acid in my face. Someone wished I would die of cancer. I’ve had some horrible things said, along with the usual racial stuff. That doesn’t help either. All I can do is address it publicly, when I do my Instagram lives, and try to encourage my fans, to let these people know we’re not going to tolerate that. And to encourage people to put light into the world, and keep pushing people to keep being positive. I try to ignore it, but every so often, a few of them get through, and I’m like, ‘Oh god, here we go!’ For the most part now, I have a better grasp on it, and I ignore it.

You could have 100 positive comments, and one negative, but you’re always gonna think about the negative.
It’s crazy, because there’s hundreds of other lovely comments, and you’d think it would off balance that, but no! That one negative comment will weigh so heavily on you. I continuously engage with my fans and try to promote being positive.

On Monét X Change and Bob the Drag Queen’s podcast, you revealed that someone on the show left you a note saying you’d be the next to go…
Yeah. When it happened, I was very very confused because it was just a mysterious note, sitting there on my makeup brushes. I asked each of the girls to come over and look at it, and give their thoughts, and nobody said anything. It’s been very strange, and I was like, ‘Okay, well someone’s fucking with me’.

Do you have any suspicions to who left it?
To be honest, I don’t, because I felt that I got along with everyone there, and I didn’t give anyone a reason to not like me. So, I just thought it was very strange and out of nowhere, but it also played in my mind. Just when you think everything’s going well, it’s not going well.

It’s odd they didn’t show this on camera.
I was very surprised that it didn’t make the camera either. I thought it would’ve really been a moment where everyone thought, ‘Wait, what is going on? Why is someone messing with Mayhem, of all people?’

I’m so curious. We better find out…
I would definitely like to know who it is, because whoever it was, I would love to give them a piece of my mind. I don’t think we’ll ever know. If someone’s cowardly enough to leave a note, and not say something to my face directly, then they’re definitely not gonna man up now. On the podcast, Monét joked that it could’ve been Dusty, because she left the week before.
Knowing Dusty when we were on the show, and after the show, I could never imagine it being Dusty, because she’s always been very kind to me and very gracious. As well as a lot of the girls, and they’ve expressed that they’ve been fans of mine for years, so I couldn’t see it coming from Dusty, definitely. But when we were talking about it on the podcast, I died, because that was the last person I could see doing it. I didn’t even know anyone knew about this! Recently, people have been messaging me asking who the note is from and I’m like, ‘Wow, people heard that podcast?’

People have been talking about it on Reddit, of course.
I wanna see these comments! That’s insane. I would like to see what the conspiracy theorists are saying, they might give me some answers! It’ll give me something to read when I’m in the airport.

Is there anything you regret not showing on Drag Race?
Honestly, no. I don’t regret anything, because I felt like I truly represented who I am as a queen. I did my best, and my best was great. It just was my time to go home, and unfortunately, sometimes with reality TV, it’s not reality. It was very shocking for me to go home, because I don’t feel like I deserved to go home that soon. I felt like I did very well, and I would lie and say ‘Okay yeah, it wasn’t my best and I probably should’ve gone home’, but that is not the truth. So I won’t sit here and lie, so I hope people see that it was an unjust elimination.

There’s always All Stars…
Hopefully I’ll get the infamous call again! It took me nearly ten years to get the first one, maybe All Stars 25 I’ll make it on!

Out of the remaining five queens on season 10, who would you like to take home the crown?
Oh goodness, out of those bitches? (laughs) Y’know what? I don’t know, honestly. Each of them have good talents, but no one has stood out to me as the winner. It’s pretty much an equal playing ground right now. I’m waiting for someone to just completely blow my mind, or for the reason to just completely fail miserably!

Related: Tatianna opens up about Drag Race, her beef with Tyra Sanchez, and her fierce debut album T1.