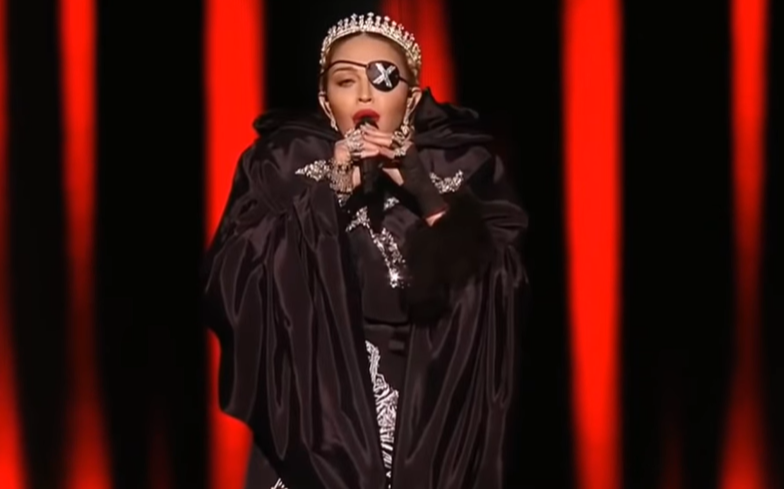 The global superstar was the interval act for this year’s Eurovision.

There have been spectacular interval acts in the Eurovision song contest, but this year might have just topped it with global superstar Madonna.

The singer was dressed with an eyepatch in a futuristic costume, fitting given that she performed Future, and was interviewed by host Assi Azar. And during her interview segment, she even quoted one great singer with “Music, makes the people come together, yeah.” Wonder who that could be from…

When Madonna got on stage she first sang her 1989 hit Like a Prayer, flanked by many monks in hoods. She then delivered, alongside Quavo, the first performance of Future.

During the song they were flanked by dancers in gas masks dancing erratically. As the song neared its conclusion the backing dancers fell of the back of the stage in pairs.

As the song climaxed, Madonna and Quavo followed suit. The song also had a political message in regards to the Israel-Palestine conflict, as two dancers carried the Palestinian and the Israeli flags on their backs.

Listen to her performance, and let us know what you thought.

Although Madonna’s overall performance got a mixed review from Eurovision fans, there were still plenty of people who supported her.

Madonna is a woman we shall be talking about years from now. One doesn’t have to be a fan to admit that. This formidable woman has been making records and headlines for 3 decades, a virtually unmatched feat in our here today gone tomorrow fame culture and is a true Icon! ❤🙏❌ pic.twitter.com/z2dTamFh8b

Sick and tired of the haters. I was there #madonna was great!

MADONNA IS A GENIUS. WE DO NOT DESERVE HER.

Thanks for doing what's right and not giving a single fuck about what people say. You ended every single one of those shit talkers. Keep doing it queen 💗 #Eurovision pic.twitter.com/Sbj2Ecvcjq

And others were there to poke fun at her outfit.

Why is Madonna a pirate? #Eurovision pic.twitter.com/gwF6ryyLCq