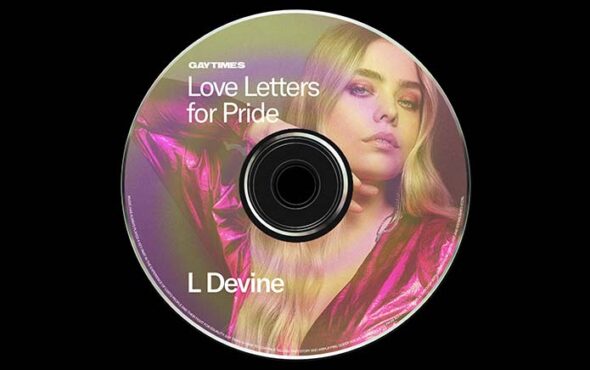 For new series to acknowledge Pride celebrations taking place across the UK in September, we’ve asked LGBTQ+ musicians and figures to write a love letter to either the community or a queer person who has inspired them, along with an Apple Music playlist to pay tribute.

Here, British singer-songwriter L Devine reflects on her own experiences as a queer musician breaking into the industry, and how the LGBTQ+ icons who came before her paved the way.

When I first began making music as a career, I remember going through a phase of worry that my sexuality might put me in a box. I feared that I would always be known for my sexuality or for being ‘the lesbian pop artist L Devine’ before just being an artist who makes music and happens to be gay.

But honestly, what was I fucking worried about? That gay box I was worried about being stuck in is in fact the most freeing space I could have found myself in. It has me surrounded by peers and a community who are so passionate about building a space where everyone and anyone’s individuality can flourish.

I’m part of a community where the music doesn’t just get people dancing, it steers real change and progress in the world. We stand on the shoulders of some of the bravest artists in music history.

Queer musicians and queer icons have always been the people who weren’t afraid to talk about the ‘taboo’ stuff through their music in a fun, liberating and empowering way, even in the face of shame. I’m so in love with this community and I’m so proud and so lucky to be a part of it.

You can listen to L Devine’s brilliant new EP, Near Life Experience Part One, on Apple Music here