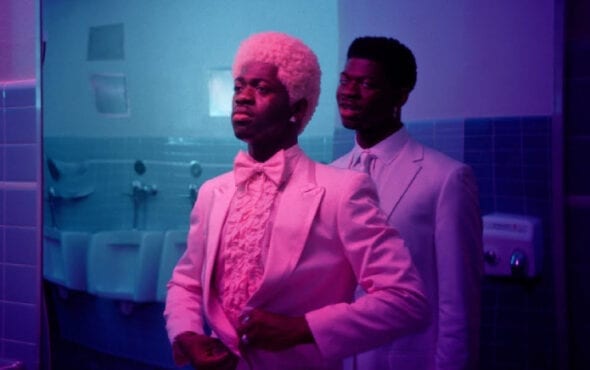 Lil Nas X has dropped the video for his new single Sun Goes Down.

The follow-up to his global smasher MONTERO (Call Me By Your Name), the track shows a softer side to the rapper; detailing his past thoughts of depression and suicide as he comes to terms with his sexuality and identity.

He sings in the first verse: “Since ten, I’ve been feelin’ lonely / Had friends but they was pickin’ on me / Always thinkin’, ‘Why my lips so big?’ Was I too dark? Can they sense my fears? These gay thoughts would always haunt me / I prayed God would take it from me.”

Contrasting with the fiery visuals for MONTERO, the video sees Li Nas X in an all-white ensemble as he travels back to the past to guide a bleach-blond version of himself, who works at Taco Bell and prepares for his high school prom.

The star explained the concept for the video, which he came up with himself, in an interview with Rolling Stone: “My visual aesthetic is always changing. But a reoccurring theme in my work would always be Surrealism, or Futurism.

“I really love to mix reality with imagination—I guess that’s my ‘thing’.

“But for [the music video for] Sun Goes Down, I kept that kind of feeling to a minimum, because I wanted it to feel very real.”

Lil Nas X added: “But you still have me in a meditative state, where I go to this purple world where it’s like my future and past all existing in one place. I fly through that and go to my past me, and I’m trying to uplift him.”

Sun Goes Down is now available on iTunes and streaming services – listen here on Apple Music and watch the incredible new music video below.

Sun Goes Down will be included on Lil Nas X’s highly-anticipated debut album MONTERO, which will also include the chart-topping single of the same name and his Christmas-inspired track Holiday.

The album is expected to be released this summer.

Lil Nas X will perform Sun Goes Down and MONTERO (Call Me By Your Name) as he makes his SNL debut on 21 May.